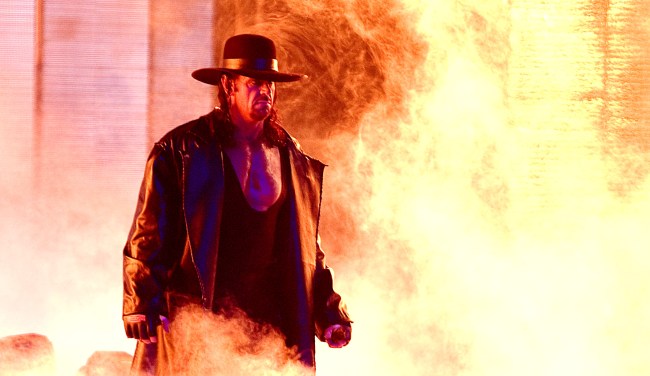 A move that would have altered professional wrestling history forever, Mark Calaway, better known as The Undertaker, admitted this week on Sam Roberts’ Notsam Wrestling podcast that he seriously considered jumping ship and leaving WWE and going to work for WCW during the wild Monday Night Wars of the late 1990s.

“Yeah, there was a time I was so frustrated with our creative direction,” ‘Taker admitted. “We had a bunch of really goofy characters. They are down there doing real angles.

“It was common knowledge that they opened up the checkbook. I was hearing guys talking about the money they are making. You would be able to get a good check and stay at home most of the time. Those thoughts were there.

“But, when it got down to it, I said I can’t. Obviously I’m not the best businessman, but something inside me said you can’t leave here.

“One, when I was there (at WCW prior to joining the WWE), and although the management had changed at this point, I went in to renegotiate a contract. I had been there for eight or nine months. My deal was coming up. I was trying to get a little bump in the money. I was on the bare minimum deal. I wasn’t looking to break the house. I went in and met with Jim Herd, Ole Anderson, and Jim Barnett. They looked at me straight in the eyes, and said you are a great athlete, but nobody will ever pay to see you wrestle.

“My loyalty to Vince (McMahon) was stronger than the short term cash I could have made if I left.”

Imagine how the landscape of wrestling would have changed if The Undertaker, like fellow WWE mainstay Bret Hart, had gone to WCW. Oh, right. WWE still would have put them out of business. However, The Undertaker’s now legendary story would have been completely different.

During the very interesting interview, The Undertaker also hit on numerous other topics including how he was worried about how he would be received the first time he made an appearance in WWE.

“I had spent almost 9 months in WCW, so people had seen me,” he recalled. “I had a fairly good break before I started with WWE, but you have this strong character. It is new and on WWF. Obviously you’re nervous because it’s your debut with a new company and you have all this behind you. You don’t want to listen to, hey, that’s Mean Mark. It was nerve-racking for sure.”

He also talked about some of his matches with opponents like Hulk Hogan, Jake Roberts, Bret Hart, and his “hideous” WrestleMania match with Giant Gonzalez.

“It was so bad on so many levels,” he said. “All these guys are going out having these great matches. You want to be mentioned in the same breath as those guys. It was not possible. It was survival every night trying to figure out what he could do.”

Speaking of Bret Hart and WCW, The Hitman was a guest on this week’s WWE Backstage and talked about how much he regretted making the jump to WCW.

“If I could do it all over again, I think would find a better way to say in WWE. Knowing what I know about WCW, I’m sorry I ever went there,” Hart admitted.

If Undertaker had his way, Hart never would have been a victim of the “Montreal Screwjob” and left the WWE.

“You should’ve put me in the match somehow with Bret,” ‘Taker told ESPN recently. “I’m sure Bret would have dropped it to me. I could have dropped it to Shawn (Michaels) later on. You know, right after that. There was a different way to do it. But, you know, Vince had to make sure and he had to cover his bases, I guess, in his mind. That’s kind of the point, I think, where the whole locker room leader really started to come about. The boys knew how upset I was that one of us got screwed over.”