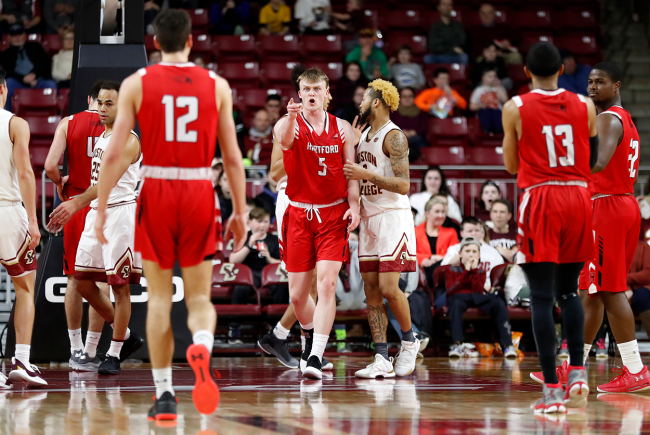 In the Spring of 2021, the University of Hartford decided to move its athletic programs from the Division-I level to the Division-III level. The transition, of course, came with a lot of push back— particularly from the student-athletes already enrolled or committed to continue their careers at the school.

To make matters worse, the decision came after the basketball program reached a historic height. In March of 2021, Hartford men’s basketball won its first conference championship and played in the NCAA tournament for the first time.

Shortly thereafter, the school voted to move from D-1 to D-3.

“A move to Division III will allow the University to further strengthen the academic, co-curricular, and wellness experience for all students. While we know this decision will disappoint some members of our community, we remain confident that this shift is in the best long-term interests of the institution and all its students,” Board Chair David Gordon said in a statement.

In response to the decision to downgrade, students and student-athletes joined together to express their frustration. They held marches and protests, voiced their displeasure with the university through written and verbal communication, and some student-athletes even took the school to court over the decision.

Come January of 2022, the request was filed and approved with the NCAA. Hartford will be moving to the D-3 level.

Of course, after it became official, the University of Hartford’s decision to move from Division-I to Division-III was not well-received by the student-athletes. Again.

Hartford held its graduation ceremonies over the weekend.

Congrats to the 1,200+ University of Hartford students who received their degrees today during #UHartGraduation.

The way in which the administration chose to approach the situation was terrible. It really couldn’t have been worse. They threatened the coaches and athletes with suspensions and forfeits.

Hey @UofHartford & @HartfordHawks instead of threatening kids not to boo that joke of a president at graduation, maybe you guys should stop doing the things that make everyone want to boo!! pic.twitter.com/gCIhff0TIT

And then, during the actual ceremony, University of Hartford president Gregory Woodward barely spoke.

Woodward barely spoke. He was never formally introduced. Shielded? The format was kinda odd. There was a University Head, David Gordon, Applaud Fred for his Retirement, Awards. Guest Speaker, SGA President, Handed out a bunch of award. To my recollection.

But that didn’t keep him from getting booed.

Was sent a little snap chat of President Woodward being booed yesterday.

Again, he didn’t stay for closing remarks last night. His feelings were hurt.

You made these decisions, Woodward. Stand by them and maybe next time… don’t run away.

Hartford’s decision is one thing. It’s heart-breaking for the student-athletes.

The way that Hartford chose to get out ahead of potential boos was even worse. To threaten what, in essence, is free speech for sake of image and status is truly wrong.