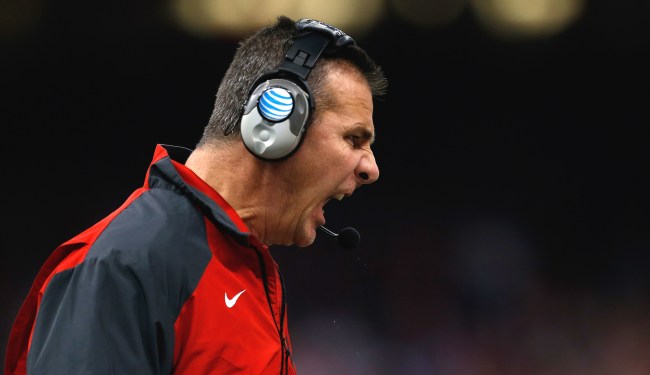 Dan Capron, a Big Ten referee, is officially retiring after 20 seasons on the gridiron. If you do anything for 20 years you’re going to walk away with some stories and serious insight and Capron told all in a Q&A with the Chicago Tribune.

While he answered questions about all of the big games he’s been a part of and nearly every Big Ten coach over the last two decades, he laid it all out there when it came to discussing Urban Meyer.

In perhaps the least shocking news of all-time, Meyer wasn’t a fan of officials according to Capron. He wanted absolutely nothing to do with anyone wearing a black and white striped shirt, he even had a person on staff who would communicate with the officials for him.

He is unlike any other Big Ten coach. He is distant, uncommunicative. He had a staff member whose job it was to communicate with the officials. I’d come over at the end of the first half, as I’m obligated to do, and say, “Coach, you’re out of timeouts.” Or maybe I’d say something like, “Coach, No. 64 is on the edge (of getting a penalty); you better talk to him.” I was engaging in what we call preventive officiating.

Anytime I would approach his sideline, he would turn and go the other direction. Now, in his defense Ohio State is a pressure-packed job and he’s got a million things on his mind. The other coaches seem to be able to parse that out in such a way that they’re able to communicate with the officials. For whatever reason, that wasn’t on his radar screen. The pregame meetings were as brief as he could possibly make them … captains’ numbers, kickoff time, everybody legally equipped. Check, check, check. Good luck, Coach. Goodbye.

The referee would literally just be doing his job, even going above and beyond letting him know about timeouts and players acting out on the field, but Meyer didn’t even care to hear about it.

Again, not the least bit surprising.

On the one hand, it’s kind of a power move that Meyer had a person on staff to take care of talking to the officials, but on the other hand, it’s a pretty brutal look.