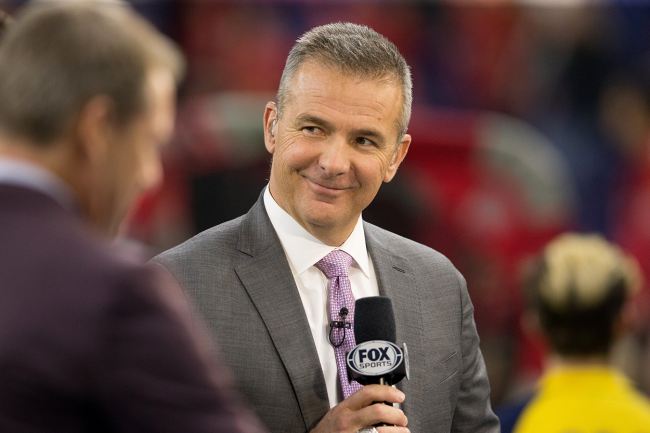 When Urban Meyer left Fox for the Jacksonville Jaguars, former Oklahoma head coach Bob Stoops took his place. Now, Bob Stoops is leaving for a head coaching job with the XFL and it only makes sense that he replaced by the man who replaced him.

Earlier this week, the XFL announced its eight new head coaches for when the league reboots. Stoops was among them and he said that taking the job will keep him from returning to Fox’s Big Noon Kickoff desk.

“Well, truth be told, yeah, Fox is sponsoring and/or televising all of the USFL football games…so there’s a conflict there,” said Stoops to the Middle Of The Day Show. “Fox really didn’t want to do it because of the direct competition… So that will preclude me from doing Fox being that once it’s 2023 we’ll be in direct competition with Fox. But they’re a great team of people. I just so enjoyed and appreciated my time with them. Just great, great people to work with, and had a lot of fun. But yeah, this will preclude me from doing that next year.”

Now there is an opening on the Fox Big Noon Kickoff desk and Urban Meyer is the leading candidate to fill the hole.

The 57-year-old recently spoke with the Tim May Podcast and made some telling comments about his future in football. He is not taking any sort of on-field job, but it certainly sounds like Meyer will be returning to the Fox team this fall.

Now that Meyer has his weekend free, because he was fired by Jacksonville before the end of his first season, he plans to go back to the studio.

“I loved Fox,” he said. “I loved their team. There’s nothing been finalized yet, but yeah I plan on going back and doing it.”

Sounds like urban meyer will be back on fox this fall via tim may podcast. pic.twitter.com/QLAgZXZnnh

It sure sounds like Meyer will be back with Fox during the 2022 college football season.