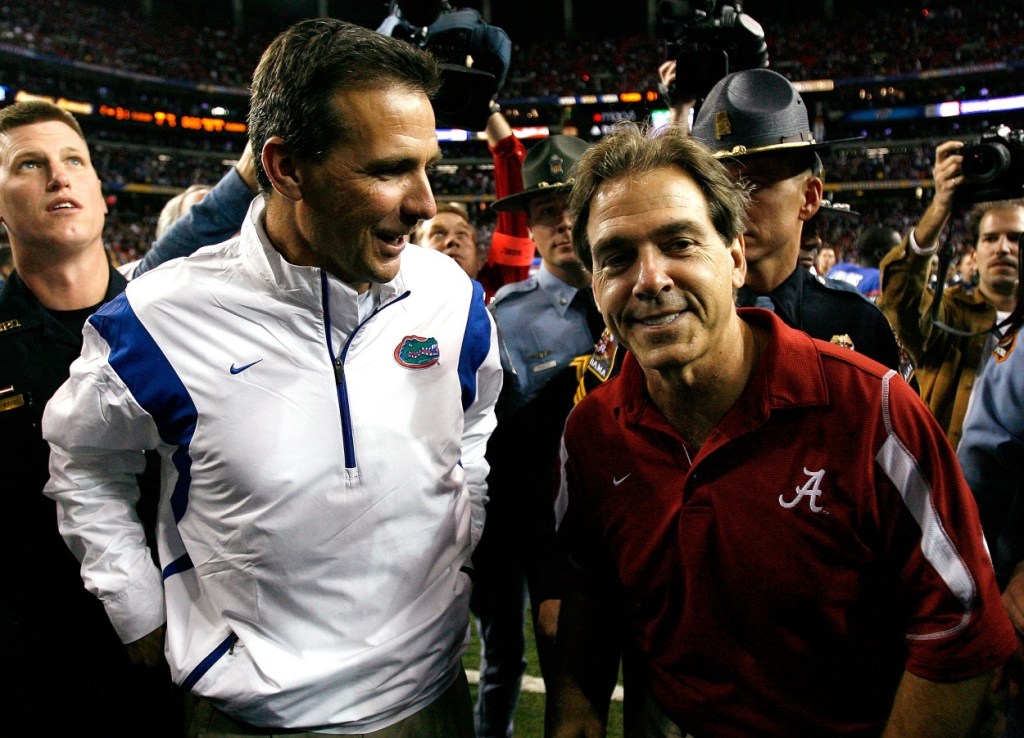 Urban Meyer is back in the football world just a short time removed from his disastrous and embarrassing tenure with the Jacksonville Jaguars.

Meyer’s return to CFB came after Fox revealed he was returning to its college football pregame show. Then Urban Meyer was a guest on Don’t @ Me with Dan Dakich where he dove head first into talking about his time in college football.

One topic of note in the conversation between Urban Meyer and Dan Dakich was what makes Nick Saban so great. It’s not just recruiting. There are plenty of teams who recruit well but it doesn’t translate into on-field success. And Urban also shared a story from his OSU coaching days which revealed how he came to fear the Alabama while watching game tape ahead of their matchups.

If yhou’ve got the time, you can watch or listen to the full Don’t @ Me with Dan Dakich interview with Urban Meyer here on Twitter, but this is the quote about Saban’s greatness that stood out:

Urban Meyer: “Saying great players in unfair, there’s a lot of teams that recruit really well, and just check the rankings, sometimes teams don’t play very well. He does as good a job developing players and adapting to his personnel that I’ve seen. And the consistency, that’s extremely hard nowadays to be consistently great, it’s almost impossible what he’s done.”

Urban Meyer won three National Championships, two with the Florida Gators and one with the Ohio State Buckeyes. He and Nick Saban are 2 of the 3 coaches to have ever won Nattys at two different schools.

Head to head, Saban and Meyer were 2-2 against each other between 2008 and 2014. Speaking with Dakich, Urban Meyer shared this story from his coaching days that hints at how he came to fear Alabama due to quality, coaching, and preparation:

Urban Meyer: “I tell this story quite often, when you’re getting ready to play a team one of the first things I would always do on a Sunday when I’m getting ready for the next team I start watching their special teams. And I knew after about an hour if we were in a street fight or if we were gonna beat that team, I knew within an hour because I would watch closely.”

Who is the better coach, Saban or Meyer?

The other reasons cited are Urban Meyer is/was the ‘better big game coach’, Urban changed one conference entirely and jumpstarted a dominant run in another, that he ‘revolutionized college football’, was a ‘better program builder,’ that Urban ‘dominated three conferences,’ and was ‘more consistently great.’

He’s trolling, right? Alabama had an off year, a ‘rebuilding season’, and still finished the season ranked #2 in the AP Poll. Alabama Football hasn’t finished outside of the AP Top 10 since 2007. On what planet is that not consistent?

Nick Saban has won 269 games, Urban won 187. I’m not trying to conflate consistency with longevity but those numbers are clearly in favor or Nick. Urban Meyer was a great college football coach but to argue that he’s better than Nick Saban just seems like someone’s trolling a bit too hard…