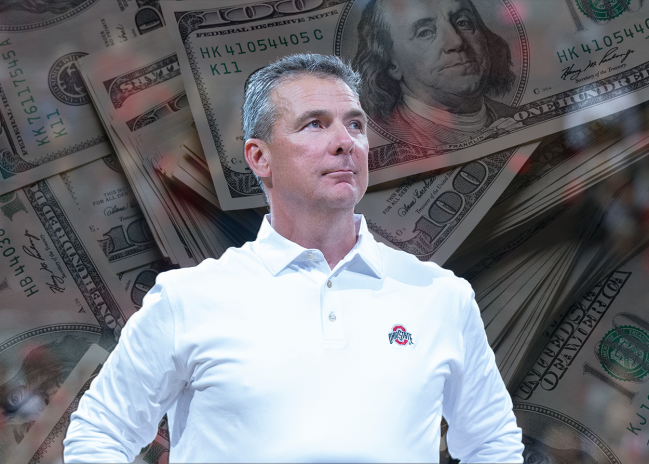 Urban Meyer is back working with collegiate sports, particularly Ohio State. However, this time, he is on the Name, Image and Likeness side of things and his new role raises a lot of questions.

It was announced this week that Meyer has joined the board of a nonprofit organization that is designed to further NIL opportunities for student-athletes. Specifically, it plans to compensate Ohio State football and basketball players for working with charities.

THE Foundation was co-founded by Brian Scottenstein, a Columbus real estate developer and tOSU booster, and Cardale Jones, a former Buckeyes quarterback.

We proudly welcome @CoachUrbanMeyer to our board. Urban has 3 Nat'l Championships on his resume, including the '14 title w/OSU. He's recognized as one of the best recruiters in college football history. Urban looks forward to seeing future success for OSU and local charities. pic.twitter.com/UEvRf7eKxf

Schottenstein wants THE Foundation, which will also rely on donations from Ohio State fans, to become the largest NIL fund in the country. He is thrilled to have Meyer as a part of the board.

“There isn’t a better person to have on the board than Coach Urban Meyer,” Schottenstein said to the Columbus Dispatch. “It goes without saying that he’s one of the greatest recruiters of student-athletes and coaches of all time. I appreciate his support and friendship.”

THE Foundation is set to launch on March 31. At that point, it will start to compensate athletes in exchange for their NIL through charity work and promotional opportunities.

There are a lot of questions to be asked about Urban Meyer’s work with THE Foundation.

First of all, how is this legal? Well, there are no rules against it. Nothing in the NCAA guidelines on NIL say that a former coach can serve on a board for a collective or nonprofit.

But doesn’t it seem sketchy?

NCAA rules say that NIL money can not be used as pay-for-play money. That is illegal.

However, as we saw with an $8 million deal that was signed last week, there are legal workarounds. A lot of it has to do with trust.

However, there are legal ways to pay recruits over the table in exchange for their commitment. Not directly, but indirectly.

Will THE Collective be allocating any deals to recruits? We likely will not know that information on a public level. But with the way that things are going around the country, it is not hard to imagine that it could be a possibility.

If that does happen, and it is an if, then Meyer’s involvement with THE Collective gets even sketchier. Is he recruiting players to Ohio State by floating NIL deals in their direction?

Whatever Meyer is doing, wherever Meyer does it, there is always an element of doubt surrounding his every move. This most recent, joining the board for THE Foundation, is one of those “every moves” that deserves all of the questions to be asked.