Urban Meyer Says Tim Tebow Has Only Done A ‘Decent’ Job At Tight End, Gives Coach Speak About Him Being A Locker Room Guy 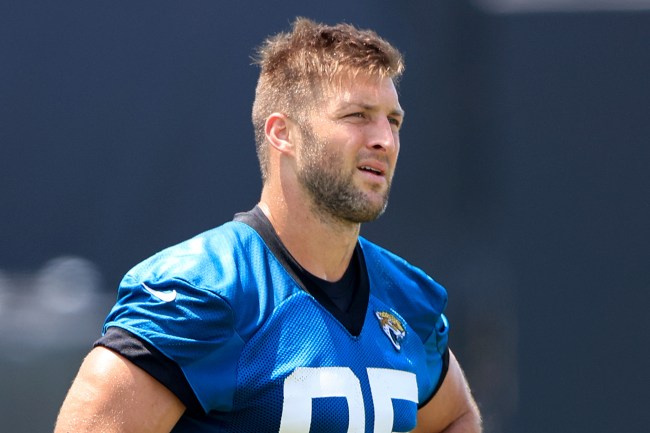 It was no secret that Tim Tebow would be facing a very steep uphill battle in his attempt to become an NFL tight end. Set aside the noise he has to listen to from a majority of the public thinking that he doesn’t deserve the opportunity at all, but trying to play an entirely new position at 33-years-old and almost a decade removed from the game is not easy.

Nevertheless, Urban Meyer’s latest comments about Tebow’s transition to tight end are a bit surprising given the fact that the two have such a long history together and seem to be the closest of friends.

One might assume that Meyer would offer up nothing but a glowing review of Tebow’s performance thus far at practice, but that isn’t the case at all. Meyer was honest in saying that Tebow has only been “decent.”

“You wish you could see and do (more),” Meyer said, according to the Florida Times Union. ”In spring football, you have full pads and scrimmages, and you can really evaluate, but it’s kind of tough right now.” …

“Oh, Tim has done a decent job. We all know this is a new position for him, he’s a great teammate. In the locker room, I can see everybody getting along, we have good chemistry on our team. But he’s picked it up decently.”

Ah, yes, the ‘he’s just a really great teammate and locker room guy’ coach speak. That comment will surely sit well with the crowd of folks yelling that Tebow doesn’t deserve the chance to step on an NFL field again.

I don’t think anyone would argue that the only reason Tebow has been given this opportunity with the Jaguars is that Meyer is the head coach in Jacksonville. It’s also obvious that this is a bit of a publicity stunt, but at the end of the day, it’s a win-win situation, from a getting people talking about the Jags standpoint, whether Tebow actually makes the roster or not.