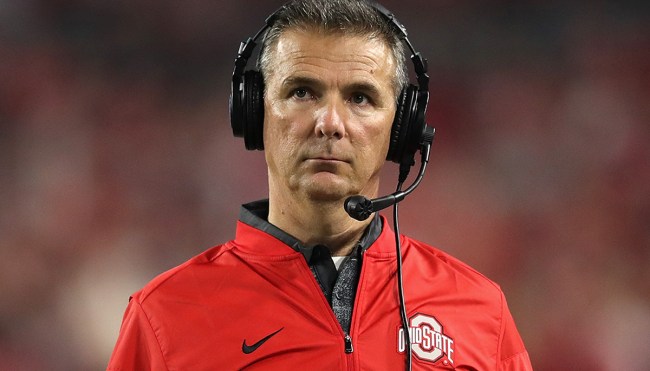 It’s been a rough few years for Urban Meyer, who stepped down as the head coach of Ohio State’s football program following a series of scandals in 2018 before returning to the sidelines for a stint with the Jacksonville Jaguars that didn’t pan out as hoped.

2022 hasn’t been much kinder to the embattled coach, as former Ohio State cornerback Marcus Williamson decided to kick off the new year by airing some dirty laundry about his time as a Buckeye under Meyer’s watch.

During the Rose Bowl, Williamson issued a couple of fairly explosive claims, none of which garnered more attention than his accusation that a picture of Trayvon Martin was used in a PowerPoint slide about a “no hoodies” rule during a team meeting in 2017.

My first team meeting. (True story 2017) This photo was presented to us via PowerPoint to institute our building wide rule of “no hoods” in the building pic.twitter.com/bGdJVZaEVT

After the allegation came to light, Meyer denied it and responded by saying:

That is absolutely false and you can check with any other player on my teams during that time to confirm what I am saying.”

According to an article that was published by The Columbus Dispatch on Tuesday, Meyer had the opportunity to check with former Buckeyes safety Tyvis Powell, who confirmed the picture of Martin was indeed used during the presentation.

When faced with that revelation, the coach was forced to backtrack and placed the blame on the unnamed staffer who was allegedly behind the decision, saying:

“I didn’t know about it until one hour ago, until after talking to [Powell]. I wasn’t there. None of the coaches were present. It was a support staffer who was in error and apologized.”

I don’t think there’s any reason to think Meyer is lying about what went down, but with that said, it’s still not a great look for a man plagued by controversy.