The U.S. Will ‘Pay A Price’ For Diplomatic Boycott Of Beijing Olympics, China Threatens 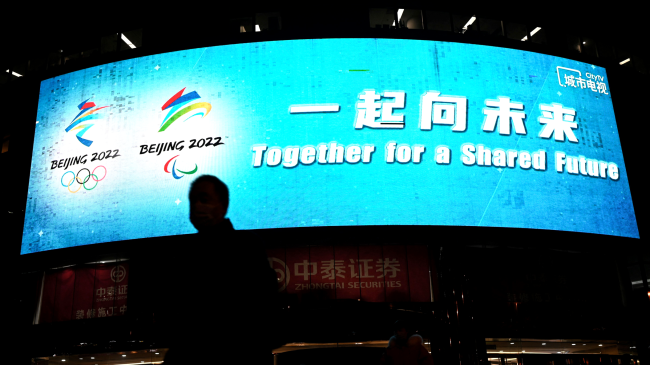 The White House announced on Monday that U.S. government officials will boycott the 2022 Winter Olympics in Beijing because of “egregious human rights abuses and atrocities.”

“U.S. diplomatic or official representation would treat these games as business as usual in the face of the [People’s Republic of China] PRC’s egregious human rights abuses and atrocities in Xinjiang, and we simply can’t do that,” White House press secretary Jen Psaki told the media.

“The athletes on Team USA have our full support,” Psaki added. “We will be behind them 100% as we cheer them on from home.”

Reuters reports that following the announcement, the Chinese Mission to the United Nations stated, “The U.S. just wants to politicize sports, create divisions and provoke confrontation. This approach will find no support and is doomed to fail.”

Chinese foreign ministry spokesman Zhao Lijian followed that statement up by telling the media that China will be implementing “resolute countermeasures” in response to the boycott. Whatever that means.

“The United States will pay a price for its mistaken acts,” Zhao said, without divulging any specifics as to what that price may be. “Let’s all wait and see.”

With the United States set to host the 2028 Summer Olympics in Los Angeles, Reuters reports that Zhao was asked if China would be boycotting those Games in reciprocation.

His response was that the U.S. boycott of the Beijing Games has “damaged the foundation and atmosphere” of sports exchange and cooperation on the Olympics.

So far, Canada, Australia and New Zealand are the only other countries to join the United States in not sending a government delegation to Beijing for the Games. However, New Zealand says they are not boycotting, but rather are not participating due to the pandemic.

Canada will join its allies in a diplomatic boycott of the 2022 Winter Olympics in Beijing to send China a message over its human rights record, Prime Minister Justin Trudeau said https://t.co/yLBEwBV3aU pic.twitter.com/xkh7NI2Lnb

Japan, Britain, and the Netherlands are reportedly also considering joining the U.S. in its diplomatic boycott.

Lisa Delpy Neirotti, an associate professor of sport management at the George Washington University School of Business, says China is only making matters worse by responding to the boycott.

“It would have been a non-story if let alone,” she pointed out. “We typically do not send a large government delegation anyway, especially in COVID times.”

That may not be true.

Bob Costas, who has hosted 11 Olympics during his illustrious career, appeared on CNN this week to discuss the boycott.

“What is it with the IOC and their affinity for authoritarian nations?” Costas later asked CNN host Michael Smerconish. “There will be an Olympics, a Summer Olympics, in 2028 in Los Angeles. It will have been since 2002 when the Winter Games were in Salt Lake, since there has been an Olympics on American soil. And yet, American television is the single greatest source of revenue for the IOC [International Olympic Committee].

“Many IOC delegates remain ticked off at the U.S. because a free press blew the cover off the Salt Lake bidding scandal. Mitt Romney had to come in and set the things straight. The whole thing was up in the air, the whole thing might have fallen apart. They have long memories about this stuff. And, the IOC and many of those delegates act in a high-handed way. And in that sense, you can see where the affinity for authoritarian nations comes in.”