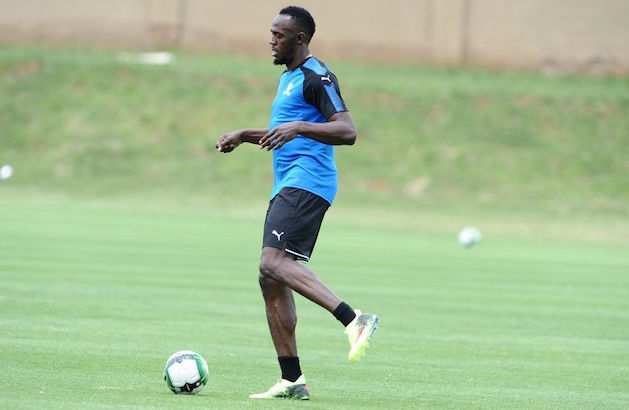 Usain Bolt’s life story is basically the plot of Cool Runnings if the bobsled team had been training their entire lives for the Olympics and actually managed to win something. The sprinter was one of the most dominant forces in the history of track and field until he decided to hang up his cleats last year, but that doesn’t mean he’s done with the world of professional sports.

I can remember plenty of people saying they thought Bolt could pivot to a career as a wide receiver in the NFL during the Rio Olympics, but he’s always expressed more of an interest in another kind of football. The Jamaican is a longtime Manchester United supporter who has dreamt of playing for the squad— and it appears there’s a chance his fantasy could become a reality. In a recent interview, he said:

“One of my biggest dreams is to sign for Manchester United. If Dortmund say I’m good enough, I’ll crack on and train hard. I’ve spoken to Alex Ferguson and I told him he needs to put in a good word. He told me if I get fit and ready, he will see what he can do.”

Luckily for Bolt, he has a couple of options if the whole Premier League thing doesn’t work out.

Bolt secured a tryout with German soccer team Borussia Dortmund earlier this month and is currently training for a trial in March that could decide the fate of his football career. However, he does have another fallback that might be in the best interests of everyone.

David Beckham recently bought the rights to an MLS franchise in Miami, and while it will take until at least 2020 before people will start playing soccer in the stadium, Bolt is already lobbying for a spot as a striker if he’s still looking for a place to play in a couple of years.

Given the fact that Usain Bolt is basically the Tim Tebow of soccer, this could be the best thing to happen to the sport in America in a long time.