USC Football Makes Brutal Mistake In Tweet On Memorial Day, Internet Lets Them Have It 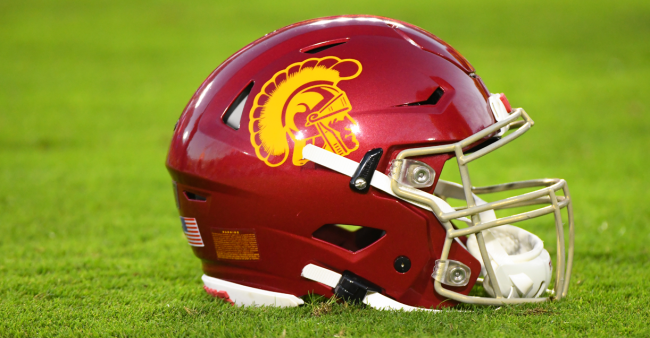 Like numerous other sports teams throughout the nation on Memorial Day, the USC Trojans football program wanted to send out a message of thanks and remembrance to those whose lives have been lost serving in the United States military.

Unfortunately, whoever was in charge of sending out USC football’s Memorial Day tweet wasn’t paying close enough attention when they grabbed an image to use in their graphic to go along with their message of “Today we honor those that made the ultimate sacrifice to serve our country.”

At a quick glance, the graphic tweeted out by USC football looks okay, right? A closer inspection, however, reveals that those jets superimposed over the American flag are, in fact, Chinese fighter jets. Whoops.

Once whoever runs USC football’s Twitter account realized the mistake they quickly deleted the original tweet and replaced it with another one – minus the Chinese fighter jets, as if the internet wouldn’t notice.

Of course, numerous college football fans on the internet, never the type of people to let an opportunity to bash a competing program pass, went HAM on USC football for their embarrassing Memorial Day Twitter faux pas.

“People don’t forget,” one person tweeted back at USC after they re-posted their Memorial Day message.

“Looks like the jets flew back home to China,” another joked.

“They need to up their NIL offer and find a graphic designer in the transfer portal,” another college football fan commented.

“Looks better without the subtle Chinese propaganda,” someone else wrote mockingly.

When the media team is 🗑 too! 😂 pic.twitter.com/NcoSICrHOK

Even the aviation subreddit is making fun of @USC_FB. You love to see it. Losers pic.twitter.com/z0mmeTijoA