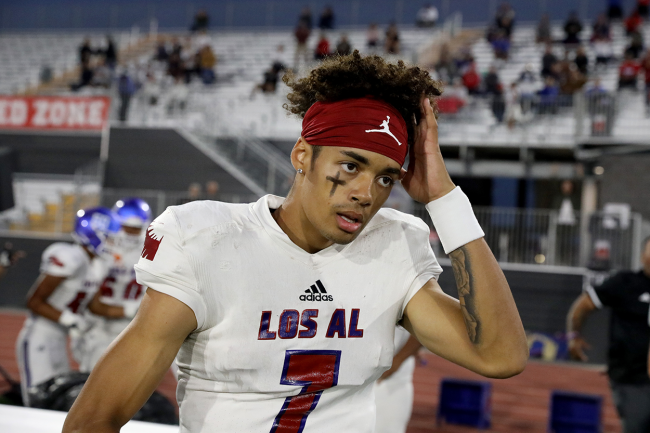 Malachi Nelson is the No. 2-ranked quarterback recruit in the Class of 2023 behind Arch Manning. The five-star prospect out of Los Alamitos, California flipped his commitment from Oklahoma to USC when Lincoln Riley left Norman for L.A. and is set to be the future of the quarterback position after Caleb Williams goes pro.

At 6-foot-3, 182 pounds, taking a year to sit, learn, and grow within the Trojans’ system could be beneficial, but his ceiling is high as any quarterback recruit in the country. In addition, he is headed to play for one of the most prominent and historic programs in college football.

As a result, Nelson’s NIL opportunities are endless. The rising senior in high school has already signed one of the most unique deals to date and his portfolio will only continue to grow over the next four or five years.

However, Malachi Nelson is being very careful with his NIL deals. He isn’t jumping into contracts and he isn’t chasing the dollar sign.

First and foremost, Nelson is only willing to partner with companies that he actually likes and/or uses. He is also surrounding himself with people who have his best interest in mind. To do so, Nelson signed with Levels Sports Group around this time last year and recently spoke highly of the premier athlete management firm that specializes in Name, Image, and Likeness— which includes Michael Vick as a mentor.

“I have a really, really good team around me,” Nelson said to Jeremy Crabtree of On3 Sports. “They kind of steered me in the right direction. They’re experienced in the world of marketing and networking, getting endorsement deals, NFL players and stuff to kind of bring that knowledge to this level.

“I would be lost without my team. They put me in great positions. You learn how to say ‘No,’ to things and do smart things that align with your beliefs. It’s not just go after money. I’m glad we’re getting into it now because a lot of times you’re in the NFL learning all these things.”

One of the things that Nelson is emphasizing is how his deals are structured. He doesn’t want to get embarrassed or look dumb — especially after a loss — because of a contract requirement and wants to be clear that the focus is not on the money first.

Nelson is the leading face of NIL on the high school level. He is only one of a handful (in the grand scheme of things) of high school athletes who have already built a significant portfolio, but he wants to be sure that he is doing things the right way.