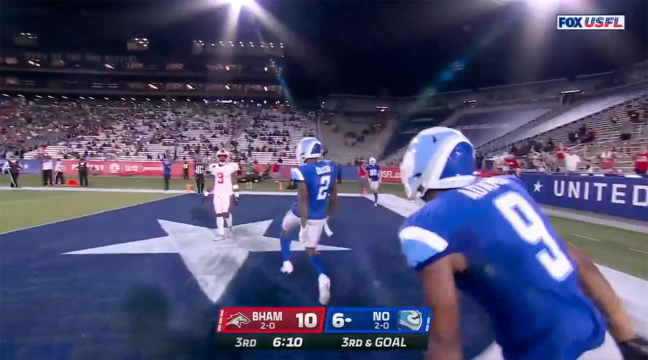 Although the USFL’s ratings have struggled after the opening weekend, spring football is better than no football and the new (old) league has made for some pretty incredible moments. One of those moments came on Saturday night, when a player straight-up laughed at his opponents for failing to cover him.

Former Ohio State wide receiver Johnnie Dixon spent three years in and out of the NFL before joining the USFL in 2022. As a member of the New Orleans Breakers, he had a massive evening in Week 3.

Despite the loss it was a big day for @YoungKing_JD5 🌊:

His biggest play of the night came in the third quarter, when quarterback Kyle Slotter found him in the end zone for six. The pass, however, was nearly picked off and barely slipped through the Birmingham defender’s hands.

On the other end, Dixon was there with open arms and made the catch.

The connection is cooking as @KyleSloter threads the needle to find @YoungKing_JD5 in the endzone yet again.

The bizarre touchdown was one thing, but Dixon’s reaction was another. It was hilarious.

While mic’d up for the game, Dixon scored the touchdown and proceeded to laugh hysterically at what just happened. He laughed directly in the face of his opponents as he celebrated the score with his teammates and made his way back to the sideline.

Dixon’s reaction was unusual and totally savage, take a look and listen:

Although the Breakers did not come out on top, Dixon’s laugh was the highlight of the game and he made his case to get another NFL opportunity.