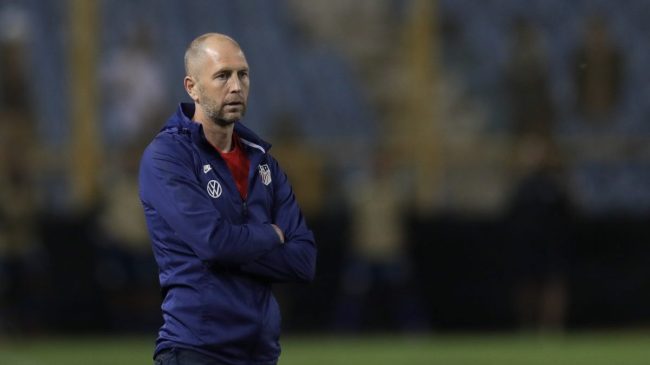 The US is less than two months away from its first match in the 2022 FIFA World Cup in Qatar. The Yanks take on Wales on Nov. 21, and they’re currently playing their final tune-up matches before the big ones.

On Friday, the United States squared off with Japan for a friendly in Dusseldorf, Germany and the early returns were, uh, not great.

The Japanese side absolutely dominated the first half of the contest and took a 1-0 lead into the break. While the score doesn’t look too bad, the game itself painted a different picture. The USMNT routinely struggled to string together passes and gave the ball away in its own third 28 times in the first 35 minutes of the contest.

Gregg Berhalter’s midfield trio of Tyler Adams, Weston McKennie and Luca de la Torre looked like it had never played together and the Japanese created chance after chance.

Yes, the USMNT was without a number of key players in Christian Pulisic, Antonee Robinson and Yunus Musah, but fans were not at all happy with Berhalter as the World Cup rapidly approached.

Berhalter’s tenure has been rocky from the start. He got the job in conspicuous circumstances over other, bigger names. Many believe that’s due, in part, to his brother Jay Berhalter holding an executive role with U.S. Soccer.

Gregg, meanwhile, has no trophies to his name as a club manager and had limited coaching success at the club level before getting the job.

Fans have repeatedly called him out for his roster choices and for his insistence on fitting square pegs into round holes tactically.

Now, just months away from the biggest tournament in the world, those issues are rearing their head and fans are tired of watching the same issues.

But fans also saw the issues coming before they happened.

This is why I'll never rate Berhalter: almost no other top level international manager chooses a system over a couple of players playing at a high level but that dont fit said system.

The longer that Pefok Ream EPB perform, the more indefensible it becomes to leave them out

Berhalter to the USMNT fanbase when Aaron Long starts in Qatar pic.twitter.com/jTHFfBUCT5

HOW IS THIS POSSIBLE IN 45 MINUTES? pic.twitter.com/W0JehOBcU0

This is the sort of soccer Berhalter always wanted the US to play. Quick, proactive, good on the ball… wait, Japan are in blue?!

Neither Long nor Zimmerman are asked to play out of the back week in and week out at their clubs.

The backline struggling to deal with Japan’s pressure.

Better teams will punish you for it.

The worst thing that has happened to this USMNT was Pepi finding form for 2 games and saving Berhalter's job. "It's a friendly you're over reacting." Nah I've been banging this drum for awhile, have you watched this team this last year?

With less than 60 days until Qatar, the people want change.

Why the hell is Jordan Morris on the field? What are we possibly going to learn from this? #USMNT #BerhalterOut

Is it time to bring the hashtag back? First Brooks snub, then Pefok Snub, then this disaster class. #Berhalterout

The World Cup might prove to be a bumpy ride.