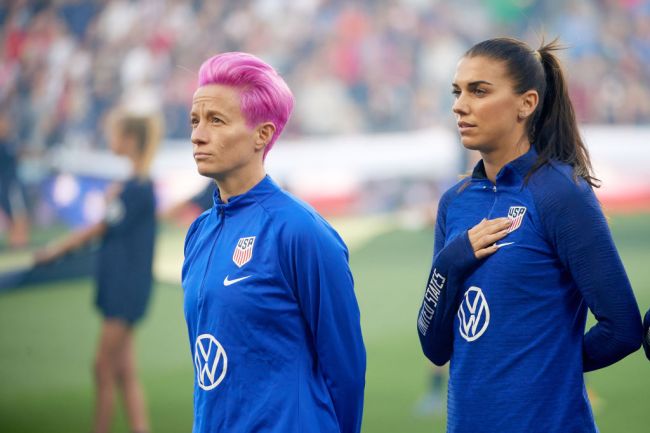 The United States women’s national soccer team decided to stand during the playing of the national anthem ahead of its matchup against Brazil on Sunday in the She Believes Cup. A number of American players have been kneeling ahead of national team matches and club matches for quite some time – including Megan Rapinoe since 2016 – but the entire team stood prior to its 2-0 win over Brazil.

Defender Crystal Dunn explained that the decision to stand for the anthem was based upon the fact that the team is “past the protesting phase.”

“Even though we are choosing to stand, it doesn’t mean that the conversations go away or they stop,” Dunn said, according to the Orlando Sentinel. “It’s all to say that we are now ready to move past the protesting phase and actually move into putting all of the talk into actual work.”

“I think kneeling was a form of protest, it was a way to bring about attention to the issues that were going on in the country and actually across the world,” Dunn continued. “We’re really proud. We’ve been doing so much work behind the scenes, like so much. We all encourage each other to step out of our comfort zone and be more involved in the communities and really just not only focused on soccer because ultimately we are more than athletes.”

Many players knelt during the national anthem ahead of the four previous matches leading into its contest with Brazil while some players, including Lindsey Horan, Carli Lloyd, and Julie Ertz, stood for the anthem.

The U.S. Soccer Federation banned kneeling for the anthem in February of 2017 after Rapinoe chose to kneel to show solidarity with Colin Kaepernick. That ban was repealed in June of 2020 following protests against racism and police brutality. Now, eight months following the appeal and the team demanding the federation apologize to black players for banning kneeling in the first place, the USWNT has decided to no longer take a knee.