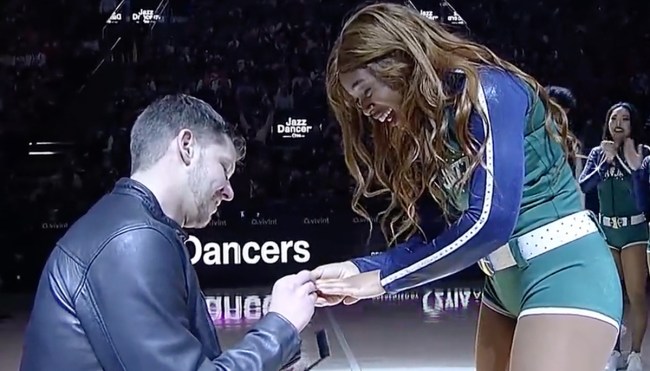 I’ve always said that if you feel like you’ve found the person you want to marry, the manner in which you propose shouldn’t really be a huge deal; if you get turned down because you didn’t stage something elaborate enough, you probably did yourself a favor in the long run.

With that said, getting engaged is (at least in theory) a once-in-a-lifetime opportunity, so it’s not going to hurt to make it as memorable as possible. You can never really go wrong with a fancy dinner, but some people feel the need to go particularly above and beyond—including one man who may have just ruined marriage proposals for every single person until the end of eternity.

During Monday night’s game between the Hornets and the Jazz in Utah, Jazz dancer Danielle Bush found herself struggling to improvise after the music she was performing to during the team’s routine suddenly cut out and Bruno Mars’ “Marry You” began to blare throughout the arena.

While the rest of the dancers didn’t skip a beat, Bush looked around while trying to figure out what the hell was going on before realizing the unexpected change was orchestrated by her boyfriend Brandon, who walked out onto the court before kneeling down to ask for her hand in marriage—a proposal she happily accepted.

This Utah Jazz dancer noticed the routine was changed and was caught off guard with a surprise ❤️ pic.twitter.com/RglQtf6M2n

Props to Brandon for pulling off what is a legitimately heartwarming moment—and one that will make him secretly despised by anyone who was planning to simply pop the question with the help of a tiny gift under the tree on Christmas morning this year.