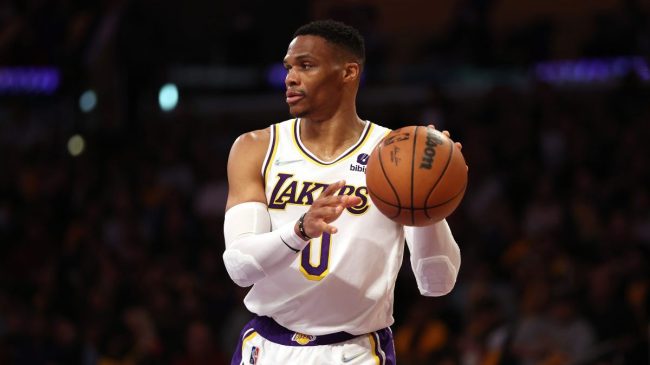 After what has felt like years of speculation, Russell Westbrook could finally be on his way out the door in Los Angeles. The Lakers superstar was linked with just about every team under the sun this offseason. But a new suitor has finally emerged and talks appear to be progressing quickly.

Westbrook spent a tumultuous 2021-22 NBA season with the Lakers. The former league MVP  had one of the worst years of his career, averaging just 18.5 points per game on under 30 percent from beyond the arc.

That led to talks of the Lakers moving on from Westbrook.

ESPN’s Brian Windhorst first linked Westbrook to a move to Brooklyn for fellow star Kyrie Irving. But that quickly fell apart and Irving remained with the Nets. Then some speculated Westbrook could be bought out. The Ringer’s Bill Simmons even suggested a buyout could end his career.

Ramona Shelburne then went on Zach Lowe’s ESPN podcast and said she didn’t believe Westbrook would accept a buyout.

Lowe Post podcast: @ramonashelburne on all things Lakers as camp approaches and Russ remains on the team, then @kpelton and I preview the Hawks — this season and going forward:

Now it appears that won’t be an issue.

Tony Jones of The Athletic reports that the Utah Jazz are locked in “ongoing talks” with the Lakers over a deal that would consolidate the Jazz roster and acquire more assets.

“The Jazz are currently at 17 players, which means the roster will have to be trimmed by at least two by some point before the beginning of the regular season. And the front office isn’t done taking trade calls. League sources indicate a market for Bogdanovic at the very least, of which there is significant interest for the 6-foot-8 shooting forward.”

Utah is a logical trade partner for the Lakers. The Jazz have both players of interest to LA and the salary to match. Westbrook makes $47 million in 2022-23. But that’s not an issue for Utah. They could trade Mike Conley ($22.6M), Bojan Bogdanovic ($19.3 million) and Rudy Gay ($6.1M). The Jazz could also move off Jordan Clarkson’s $13.3M salary.

Either way, it appears a deal for Westbrook could be on the horizon.