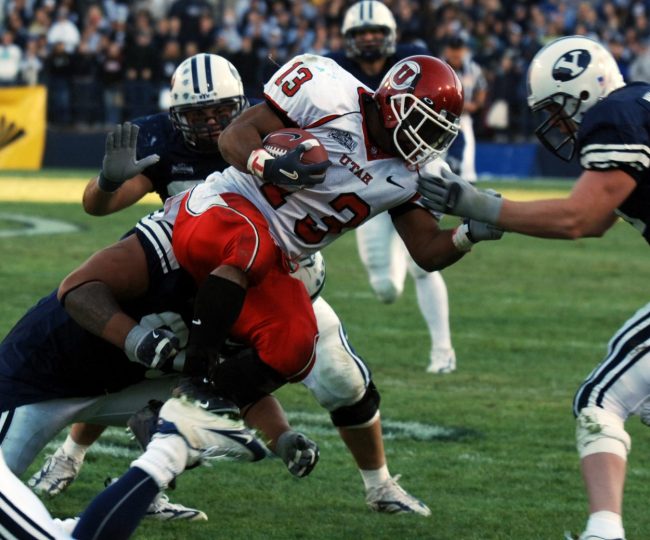 Utah football hired a new running back on Wednesday and he is a familiar face. After the departure of Kiel McDonald, who left for the same position at USC, head coach Kyle Whittingham hired Quinton Ganther to fill the role.

Welcome to the family, Coach Ganther!

Our new running backs coach has been named: https://t.co/E48KtSDZV1 pic.twitter.com/oLg3bjegZ9

Ganther, who played two seasons at Utah, was a part of the undefeated team that crashed the BCS in 2004. In 2005, he ran for 1,120 yards and seven touchdowns.

He also laid one of the most vicious truck sticks that you will ever see. During the Holy War, which is one of, if not the greatest rivalry names in sports, Ganther absolutely annihilated a BYU defender who came way too high.

Utah just hired former Utes running back Quinton Ganther as its new RBs coach and this is him trucking a dude in 2005 pic.twitter.com/oIov4rmedf

He was an absolute bowling ball that, as seen during The Holy War, was impossible to bring down and averaged 5.5 yards per carry. He literally fell forward on every play.

After a dominant senior year with the Utes, the Fairfield, California-native was drafted in the seventh round of the 2006 NFL Draft. Ganther spent five years with the Titans, Redskins, Seahawks and Bills, which is longer than the average amount of time spent in the NFL by a running back.

Once his playing career came to a close, Ganther got into coaching. He started as a grad assistant under Whittingham in 2012 before joining the running backs staff with the Seahawks in 2013. From 2013 to 2021, Ganther coached his position at Weber State University before being hired by Urban Meyer as the offensive quality control coach in Jacksonville.

Now, eight years after returning to his alma mater to start his coaching career, Ganther is back. The Utes have been known to produce a steady stream of quality backs and if they run anything like Ganther under his guidance, they will be hard to take down.