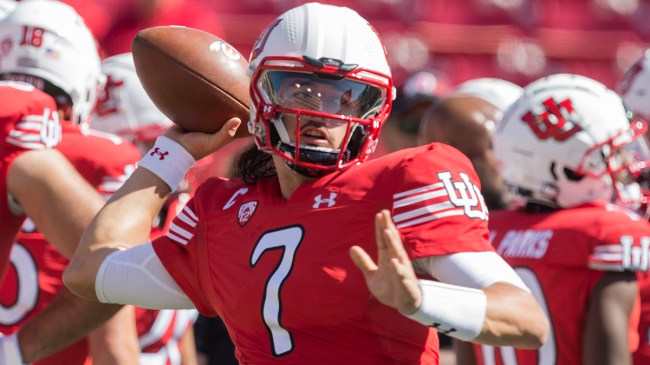 Athletes around the world of sports have earned some amazing nicknames over the years, and college football is certainly no exception.

It’s hard to beat the moniker Reggie White earned during his time at the University of Tennessee, as the formidable defensive end was dubbed “The Minister of Defense” thanks to the combination of his prowess in the trenches and his decision to become an ordained member of the Baptist Church while he was playing there.

There are plenty of other fantastic options to pick from, including the “Hefty Lefty” who was University of Kentucky quarterback Jared Lorenzen and the “Honey Badger” label Tyrann Mathieu earned thanks to the shutdown defense the safety used to routinely make opponents who tried to take him on look absolutely foolish.

Now, we can add a new entry into the Legendary College Football Nickname canon courtesy of Utah quarterback Cam Rising, who saw the one that’s been bestowed upon him by fans go viral after it made its way into the media guide the team released prior to its season opener against Florida on Saturday.

That amplification came courtesy of Mike Golic Jr., who posted a screenshot of the junior’s bio on Twitter on Wednesday along with a message asking anyone familiar with the Utes to confirm that their starting QB’s nickname is really, actually…”ThiccBoi.”

someone, anyone in @Utah_Football twitter world please confirm for me that Cam Rising’s nickname is actually, truly “ThiccBoi” pic.twitter.com/fS1lb5nvE0

It didn’t take long for him to be assured that is indeed the case courtesy of the most reliable source aside from Rising himself.

Plenty of Utah fans also flocked to his mentions to affirm their undying love for their One True ThiccBoi, and while plenty of people who were previously in the dark quickly hopped on the bandwagon, the name itself understandably left plenty of outsiders fairly confused.

Last year, Utes wide receiver Britain Covey recounted the alleged origins of “ThiccBoi”. He claimed it was originally the result of an online mixup that occurred after Rising secured the starting job that led people to believe a random Twitter user with the same name had @ThiccBoi7 as their handle (a number reflective of the sole digit on the QB’s jersey), which supposedly led to the team and its fans adopting it.

However, as Outkick notes, the record was ultimately corrected by the Twitter user who actually played a role in its popularization. The guy in question says he and a friend embraced the label after seeing a “pic of [Rising] in practice where his butt looked huge,” and it continued to grow in popularity to a point where the QB now sells ThiccBoi merchandise on his personal website.

It’s hard to think of a better way to take advantage of NIL rights than that.