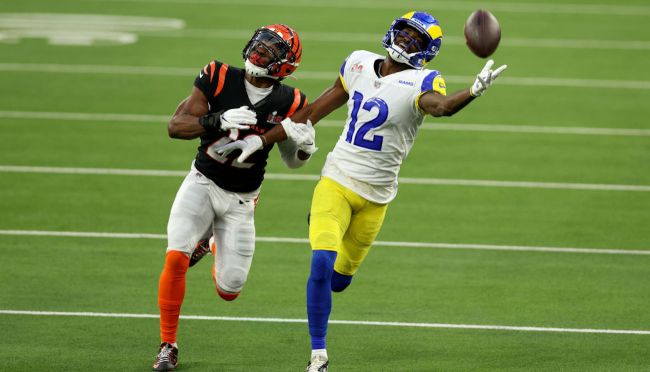 Despite playing in the biggest game of his life, Super Bowl LVI wasn’t even the biggest event of the weekend for Los Angeles Rams wide receiver Van Jefferson, as his wife went into labor immediately following the big game.

Naturally, because the Super Bowl is one of the biggest events in the world there were cameras everywhere recording everything, which led to the awesome moment that Jefferson learned his wife was in labor being caught on film.

“Your wife’s giving birth right now,” a staffer rushed to tell Jefferson, who replied with a simple yet understandable “Oh my gosh.”

“But why do we have to go quick, Daddy?” his daughter Bella asked.

“Because she’s having a baby,” Jefferson responded.

The moment @VanJefferson12 found out his wife was in labor ❤️

Van Jefferson hustling out of the stadium to get to his wife in labor #SBLVI pic.twitter.com/0GDW0ceWLf

After learning of the life-changing news, Jefferson immediately left Englewood’s SoFi Stadium to head to the hospital to be with his wife and newborn son. Hell of a day for VJ.

In the big game, Jefferson — the second-year wide receiver who the LA Rams drafted out of Ole Miss with their 2020 second-round pick — caught four passes for 23 yards. As things currently stand, the defending NFC and Super Bowl champion Rams are the third favorites to win next year’s Super Bowl with +1000 odds, which trailers the Kansas City Chiefs and Buffalo Bills, who are both at +750. Trailing the Rams are the Dallas Cowboys, San Francisco 49ers, and Cincinnati Bengals, the defending AFC Champions, at +1400.

RELATED: Los Angeles Didn’t Crack Top-10 TV Markets For Super Bowl LVI Even Though It Was In L.A. And Included The Rams