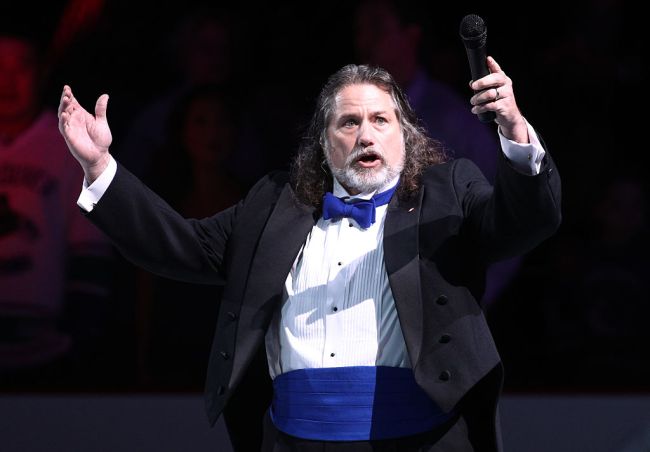 Longtime “O Canda” singer for the Vancouver Canucks, Mark Donnelly, was fired after attending the Christmas Freedom Rally in Vancouver on Saturday, an event in which hundreds of people stood up against COVID-19 restrictions.

According to TSN, Donnelly sang the anthem at the event and once the story made it to social media, Canucks owner Francesco Aquilini decided to publicly fire him on Twitter calling him the “former Canucks anthem singer.”

Donnelly, who has been associated with the Canucks since 2001, called the restrictions in Canada “draconian lockdowns protocols” while calling out health officials for their original 15-day flattening of the curve proposition which has turned into months of new health and safety guidelines.

“What was originally sold as 15-day hunkering down sprint for the common good has turned into a 10-month marathon from hell, where the finish line is constantly being moved further into the distance,” he said according to TSN.

“As someone known for singing our great national anthem, I’m standing up against what I feel is tyranny, plain and simple,” he said to applause and cheers from the crowd.

Donnelly also explained that anyone that seems to go against the narrative immediately gets canceled, which was certainly the case in his own life following the event.

“Sports figures, entertainers, politicians, et cetera, can stand for anything as long as it supports the narrative. You can support rioting, looting, destructions of livelihoods and reputation, but take a position against the narrative and you are worthy of exile or worse.”

Donnelly said that as of December 5, nobody from the organization, including Aquilini, had reached out to him about any formal firing.