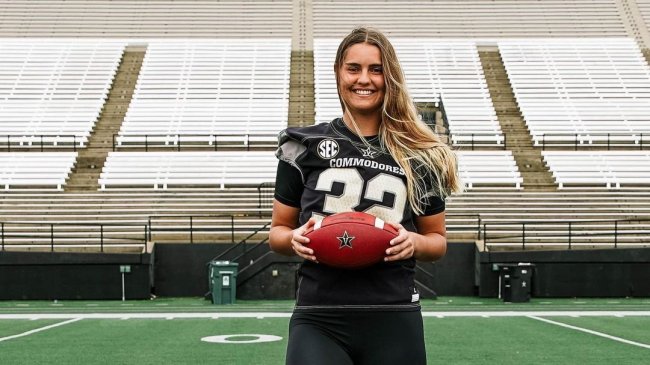 News circled earlier this week surrounding Vanderbilt football’s special teams room and its COVID-19 outbreak. The rumors became official on Friday when the university announced that Commodores women’s soccer goalkeeper Sarah Fuller would be suiting up as the team’s place kicker for its game against Missouri on Saturday morning.

Because of contact tracing within the football program, head coach Derek Mason’s team is down to a limited number of specialists this weekend and called his associate Ken Masuhr about the idea. When Masuhr, the Vanderbilt soccer associate head coach, called Fuller earlier in the week, she was planning to head home for the Thanksgiving holiday before resuming classes online for the remainder of the semester. She wondered what he could want.

“Have you every kicked a football?” he asked. She said yes, that she had.

An hour later, after an enthusiastic yes, she was at practice and joining the team’s specialists in their field goal kicking routine. Fuller, a senior goal keeper, is coming off the school’s first SEC Tournament title since 1994 after eliminating Tennessee, Texas A&M and Arkansas and will be on the sideline should Mason call her name.

If Fuller takes a snap, she will become the first ever female to play in a Power 5 conference football game. Even more unbelievable, she spoke it into existence.

She and her soccer team were watching last weekend’s game between No. 6 Florida and Vanderbilt. The Texas native happened to say something along the lines of “I could do that” and her teammates laughed. Well, it’s Fuller who may get the last laugh on Saturday.

“I did not know I manifested that into a reality […] (Monday) I decided I was just going to take in the win and take in the soccer aspect,” Fuller said. “(Tuesday) it’s like now let’s get into the football stuff. It hits me every now and then I’m like, ‘Whoa this is all happening.'”

The Commodores kickers have only made three of eight attempts on the season, so there’s no point in not sending her out there to boot one, even if there are enough kickers healthy come kickoff. Fuller and the rest of Vanderbilt’s roster will take the field at 12:00 p.m. EST and she’ll be sporting a pretty awesome helmet detail.

Tomorrow I will be wearing “Play Like a Girl” on the back of my helmet. @iplaylikeagirl is nonprofit that encourages girls to play sports and get exposure to STEM opportunities. Check them out! #playlikeagirl https://t.co/2inXh5PM2V pic.twitter.com/W7lF9dXkUR

Here’s to hoping she continuously gets called upon and can’t miss.