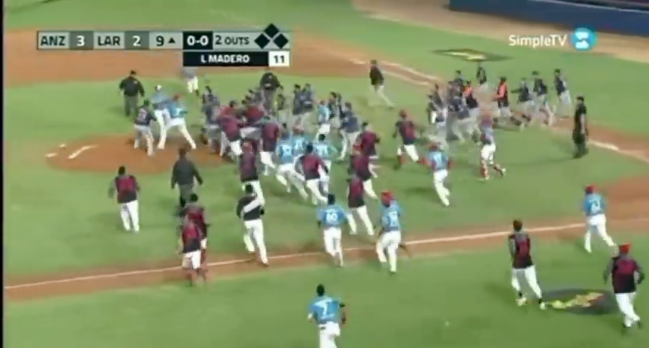 Winter baseball is getting crazy down in Venezuela. During a recent game between El Caribes and Los Cardenales, a wild brawl caused both benches to clear.

Things got started when a batter for El Caribes was plunked in the side. It appeared to be pretty intentional.

Catcher Tomas Telis, who wore the pitch from Luis Madero, was upset. He immediately turned toward the mound and started yelling in Madero’s direction.

As the umpire tried to break up a potential fight, the benches cleared for both sides. It all fell apart from there.

Both teams start pushing and throwing punches at one another, and then it became a full-blown brawl. It wasn’t just a little scuffle— haymakers were flying.

Amidst the chaos, former MLB cult legend and Minnesota Twins utilityman Willians ‘El Tortuga’ Astudillo decided to get involved. Somebody comes at Madero from his left side, which pulls his attention in that direction.

At that point, Astudillo flies in and absolutely clobbers him with a sucker punch. Madero went down instantly.

It was absolutely vicious and made for quite the ugly scene.

Astudillo was released from the Twins roster earlier in the week, so perhaps he had some pent-up anger he needed to take out. Regardless of the reason, Astudillo’s sucker punch was a pretty weak move.

If you’re going to fight, stand there and make it an even match. Don’t come flying in and clobber a dude who has no idea that you’re even there, let alone coming at him with closed fist.