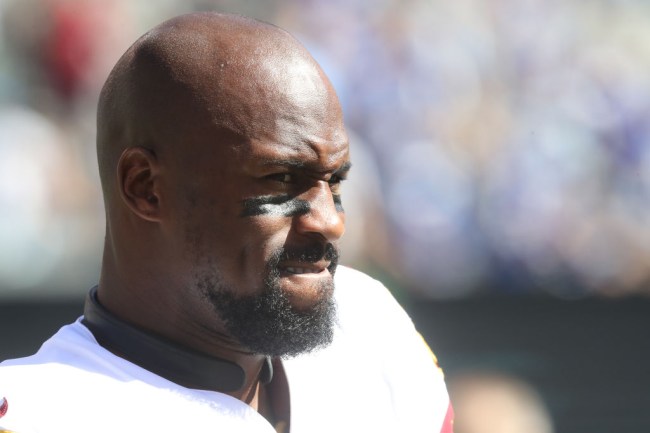 Last year, Rob Gronkowski harnessed the power of Instagram to inform the world he was hanging up his cleats thanks to the toll football took on his body over the course of his nine-year career with the Patriots, and while there were countless rumors he might attempt a comeback last season, Gronk seems to be perfectly content taking advantage of his newfound free time.

In addition to scoring a gig as an analyst for NFL games on Fox, the tight end has also leveraged his fame to promote his partnership with a CBD company and dashed the hopes and dreams of Patriots fans back in November when he teased a “big announcement” that ended up concerning a huge party he threw in Miami before this year’s Super Bowl.

During the pregame show to The Big Game, Fox aired a Golden Girls parody starring Gronk, James Harrison, and—surprisingly—Vernon Davis, who used it as an opportunity to casually reveal he was stepping away from the game as well.

It’s not exactly clear what the former Redskin is going to do now that his life isn’t dedicated to football, but last year, ESPN visited him on the set of Hell on the Border, a Western movie starring Ron Perlman and Frank Grillo in which Davis had a small role.

The tight end had previously appeared as himself alongside Dwayne Johnson in Baywatch (in addition to popping up on an episode of The League) but it appears he’s caught the acting bug and intends to seriously pursue a career in Hollywood.

Earlier this week, he chatted about his pivot on an episode of SportsCenter and revealed he’s currently preparing to head to Denver to film Red Winter, a movie where his character finds himself and his significant other hunted by a drug cartel after they witness two men carry out a hit.

Davis was asked to give viewers a taste of what to expect by delivering a line from the movie, and after thinking long and hard about his options, he decided to forgo any form of dialogue in favor of sobbing hysterically for far too long.

The clip eventually came to the attention of Jets safety Jamal Adams, who seemed to be quite amused.

I’m at dinner & I promise I just busted out laughing…
This cannot be real bro! 😂😭 https://t.co/AV8Y6Kazkx