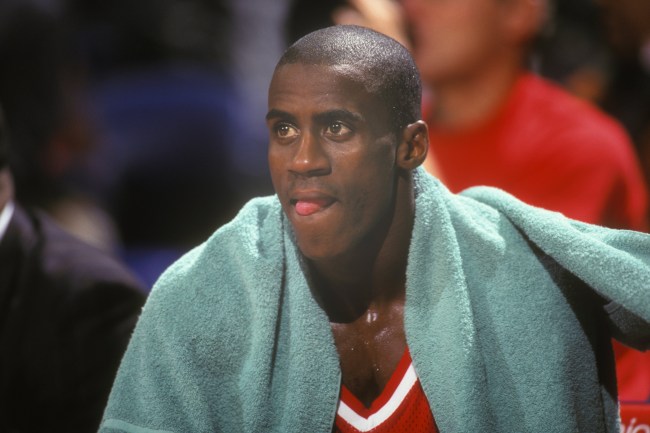 We’re talking about the dude who brandished a free weight as a weapon to use against then-teammate Gary Payton in a locker room fight that injured two other teammates who attempted to de-escalate the chaos.

Maxwell, a two-time NBA champion, was given the nickname Mad Max for his clutch shooting, but it’s obvious the nickname stuck because he could be one angry chap.

Maxwell faced kidnapping charges, filed for bankruptcy, failed to pay $150,000 in child support, and was accused of knowingly giving a woman herpes (court ordered him to pay $592,000 to the victim), but the most public hit to his reputation came on Feb. 7, 1995 and was impetus for the Houston Rockets to part ways with the shooting guard after two titles.

The footage below, which has gone viral this week, shows Maxwell using his potty mouth to a fan (directly in front of a child, no less) before ascending into the stands to wallop a trash-talking fan in the noggin.

Mad Max was handed a 10-game suspension from the league and fined $20,000 for the assault.

And he was sued by the victim of the punch, Steve George, who asked for $1.4 million from Maxwell and another $3.1 million from the Rockets for failing to control a player with a resume indicating he might tend to get out of control.

Maxwell countersued, claiming George had showered racial taunts at him — an allegation that nobody else ever collaborated. Eventually, there was a settlement, but Maxwell’s issues never seemed to end. [via Yahoo! Sports]

How does a man have such a long NBA career with 10 different teams with a rap sheet this long?

Jazz fans, before you engage with Vernon Maxwell on here just remember that THIS is the man you’re trying to reason with.

Save your breath and send him this fun basketball card instead. pic.twitter.com/dbAIqJ3AGz

Someone once told me that in college Vernon Maxwell showed up at the track some morning, without training, and ran a 2 minute 800 meters in basketball shoes.