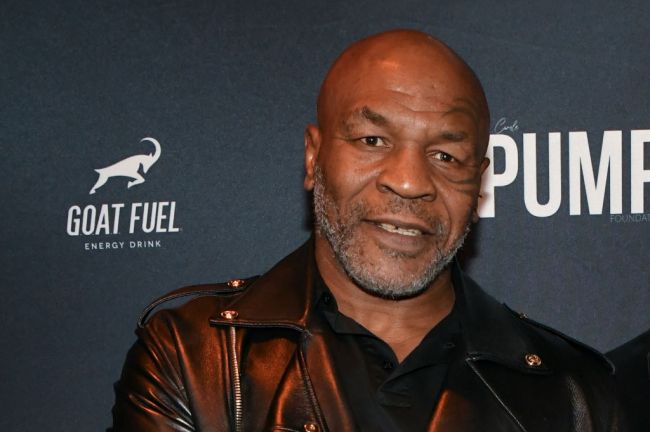 Mike Tyson’s zen-like coolness probably saved a man from making one of the biggest mistakes of his life.

On Wednesday, TMZ released a video showing a man disrupting a comedy set at a comedy club while trying to get Tyson’s attention. The man ended up pulling out a gun when security tried to get him to back off Tyson.

TMZ obtained this insane video of what we’re told was a small comedy show Tuesday night on a rooftop bar in Hollywood, and MT was in attendance with a few friends.

At first you see Mike seated calmly at his front row table taking in the show — but the whole thing was interrupted by a random guy who approached Mike and co. and attempted to chat him up, disrupting a comedian’s set and everyone’s good time.

While you can’t hear exactly what was being said in the footage, eyewitnesses tell us the man was actually challenging Mike to a fight — suggesting he wanted to elevate his “status.”

Mike, of course, kept it chill and didn’t engage with the man … mostly just letting him talk. Eventually, though, another man intervenes and tells the dude to scram. We’re told this was actually the host/MC of the night.

That pissed off the guy challenging Mike … who threatened to shoot the host, and then pulled out a gun from his waistband and cocked it in front of everyone. Naturally, everyone gasped and started ducking under tables.

A cool, calm, and collected Tyson diffused the situation by listening to the gunman and hugging him while others ran out of the comedy store in a panic.

Luckily, he never fired, put the gun away and almost immediately regretted it. He once again approached Mike, and asked him not to call cops. Once again, Mike just sat there in relative silence, heard the guy out and in the end, embraced him.

Mike actually hugged the man, at which point he finally left without further incident. We’re told people started to trickle out after that with some trepidation — not knowing if the dude was lurking somewhere down below in the streets. After a bit of time, Mike departed too.

You can watch the video below, courtesy of TMZ.