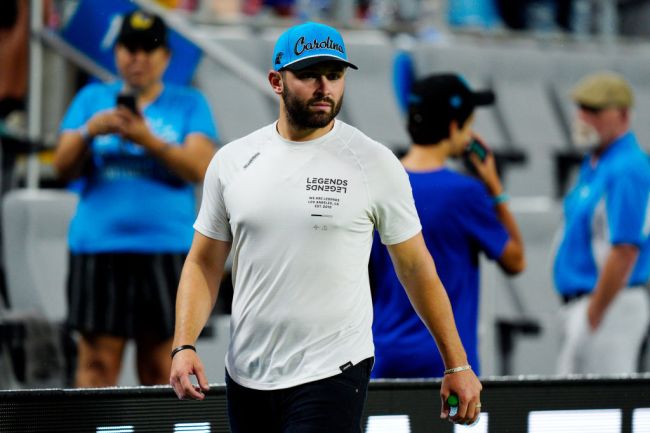 There is no quarterback in the NFL who is currently under more pressure than Baker Mayfield to perform right off the bat during the 2022 NFL season.

The only team he has ever played for in his professional career kicked him to the curb for a big name facing a suspension and there was surprisingly little interest around the league in acquiring him.

Now he is exepected to be the starting quarterback for the Carolina Panthers next season, but isn’t under contract beyond that and needs to give teams a reason to be more interested in him as a free agent over his next 17 games.

It seems that endeavor hasn’t gotten off to the most promising start. Today it was reported that Baker threw an interception during his first Panthers practice and the video that followed showed a badly under thrown deep ball was responsible for the pick.

New #Panthers QB Baker Mayfield underthrows a deep ball and it results in an INT.

Keith Taylor picks him off.

Video of the Baker Mayfield's INT on his first practice with the #Panthers pic.twitter.com/CQ5s7jC2Zi

While that throw isn’t a great look for Baker, it certainly shouldn’t cause too much concern among Panthers fans. Baker is sure to be shaking off a bit of rust in his first full practice since he was shut down at the end of the 2021 season.

Sure, it’s a pretty ugly throw against no pressure, but Baker should get better as he gets a few more practices under his belt, gets more comfortable with a new playbook, and gets comfortable with new teammates.

If Baker is still making throws like this as we approach the middle of August, then Carolina Panthers fans might have a good reason to start worrying about what the 2022 season is going to look like.