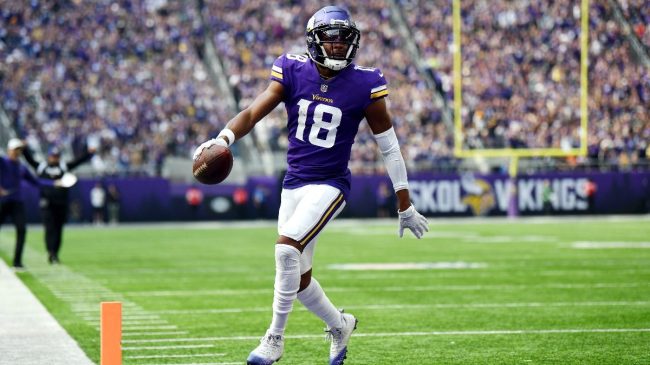 The Minnesota Vikings dominated the Green Bay Packers in the season opener and most of the thanks can go to Justin Jefferson. He torched Green Bay’s secondary throughout the game and proved once again why he’s one of the best wide receivers in the NFL. After the contest, quarterback Kirk Cousins reveals the one trait that makes Jefferson truly elite.

Cousins didn’t hold back when discussing Justin Jefferson. It’s no secret that the Vikings quarterback has an elite weapon in the passing game. Jefferson has the uncanny ability to take a game over. However, it sounds like there is one trait that stands out from the rest as Kirk Cousins praises his talented wide receiver.

Justin Jefferson always seems to find himself in the end zone. We’ve seen it time and time again throughout his young career. Not only is he incredibly efficient, but Kirk Cousins nails it on the head in describing Jefferson’s scoring ability. As long as he has the ball in his hands, he’s a threat to put up points for the Vikings.

We should expect to see Minnesota continue to feed Justin Jefferson the ball all season long. After putting up a ridiculous statline of nine receptions, 184 yards, and two touchdowns, it’s easy to see why the Vikings value their star receiver so much.