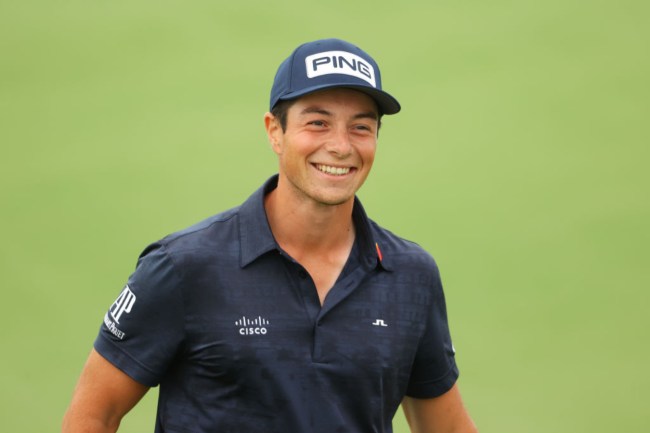 The 2022 Players hasn’t exactly gone to plan with a Monday finish in-store following an absurd amount of rain on Thursday and Friday. The long weekend has provided plenty of fireworks, however, with Viktor Hovland’s ace at the Par 3 8th being the latest.

Hovland was one of the many players in the field that had to go out and finish his third round of play on Monday morning before his final 18 holes later in the afternoon.

The Norwegian stood on the 8th tee at 2-under for the tournament but walked off the green at 4-under after his hole-in-one on the 219-yard hole.

While the shot itself was quite literally perfect, Hovland’s’ celebration after seeing his ball disappear caught everyone’s attention as well.

Hovland went to give his playing partner Kevin Streelman a high-five, but Streelman pulled his hand away at the last second to mess around with the 24-year-old. Hovland responded by picking Streelman up and carrying him a few yards.

Ace on the par-3 8th. pic.twitter.com/Y7bOJMyfut

While his ace didn’t come at the famed Par 3 17th, a one is a one, Hovland will certainly take it.

Hovland has quickly become one of the most likable players on the PGA Tour. His celebration with Streelman will only add more fans to his corner, that’s for sure.