Step Aside Patrick Mahomes, Villanova’s QB Threw The Craziest Touchdown Pass Of All-Time While Falling Down 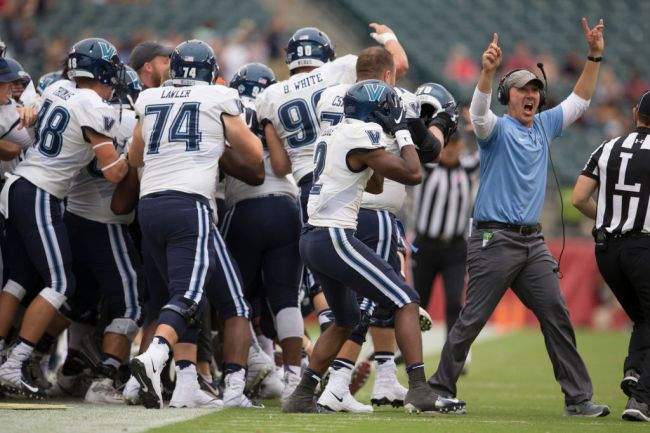 In case you forgot, there is regular season college football going on as you read this. With many of the smaller conferences and programs having their season delayed to the spring because of COVID-19, it has allowed some incredible highlights to come from the FCS and lower-tier schools. That notion was true on Saturday as the No. 14 Villanova Wildcats faced the No. 7 Delaware Fightin’ Blue Hens in the Colonial Athletic Association.

The home team underdogs fell behind at halftime and found themselves down 27-13 with under four minutes remaining in the game. Facing a 3rd-and-1 from the 1.5-yard-line, Wildcats quarterback Daniel Smith took the snap and rolled out to his right. As the defense collapsed, Smith found himself tripped up around the 8-yard-line by Hens linebacker Johnny Buchanan and started to fall to the turf. In a moment of desperation, whether intentionally or not, he chucked the ball behind his back while flailing around in the air. The ball floated toward the end zone and, somehow, wide receiver Charlie Gilroy came down with the pass for a touchdown.

Patrick Mahomes is the king of completing ridiculous, uncomfortable and unusual throws, but Smith takes the crown in this instance.

Even the Buccaneers receivers couldn’t believe the throws that Patrick Mahomes made during the Super Bowl 🤯 pic.twitter.com/65gAVVNJy9

Villanova went on to lose the game 27-20, but a loss on the scoreboard can never take away a highlight of such absurdity. That is a throw that Smith will never forget and only could have been better if it was a game-winner. The Wildcats drop to 2-2 in their final game of the year and the Blue Hens closed out their undefeated short season at 5-0.