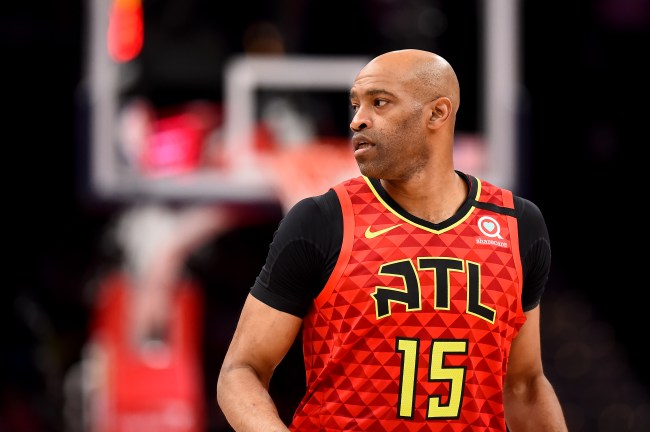 You miss sports. I miss sports. The days seem longer and the weeks seem endless without any big games on the horizon.

People are finding interesting ways to keep sports at the forefront of their minds. This includes everything from getting pro athletes to play online tournaments to watching Marble Racing on YouTube. Joe Buck has been announcing people’s mundane everyday activities as if they were sporting events.

The Athletic took to Twitter to ask people what the most random piece of sports memorabilia they own is. I found it a good opportunity to flex on everyone with my 1994 Michael Jordan autographed baseball which I got at Publix during his midlife crisis.

One guy responded saying his prized possession is his Vince Carter autographed basketball card. The man, the myth, the legend himself swooped in and ruined the guy’s whole life by telling him the $125 card he paid for isn’t Vince’s signature at all.

A @mrvincecarter15 signed program I paid $125.00 for in a silent auction pic.twitter.com/YLDLBJBO5n

Hate to be the bearer of bad news but that’s not my signature that’s Alvin Williams autograph… https://t.co/vxgI6VzVgb

As it turns out, it wasn’t Alvin Williams’ signature either. He’s not even in the photograph!

If I’m that dude I’m now trying to figure out any way to send it to Vince Carter to get the real autograph now that I’ve got his attention. It’s not like anyone’s busy with real-life right now anyway.

There are some definite treasures to be found in the Twitter thread.

My husband claims this 2008 @ChaseDaniel Heisman hopeful viewfinder is not random. Our daughter loves it. pic.twitter.com/B7GYGwDYlN

I’ve got a Club LaVela employee schedule signed by NASCAR drivers Dale Earnhardt Jr, Martin Truex Jr & Elliott Sadler when they came to PCB to enjoy spring break back in ‘04. A coworker worked a 2nd job bar tending there so she had them sign her schedule copy for me #NASCAR pic.twitter.com/Q0ikzojUYe

1981 Ken Brett jersey which I got 7 of his @Royals teammates, including his brother @GeorgeHBrett, to sign. pic.twitter.com/LxFpK2yvCZ

Champagne corks from the Mets' Wrigley Field visiting clubhouse celebration after the 2015 NLCS sweep. (It's OK, Chicago. You made up for it the next season.) pic.twitter.com/ZbfiuXoskY

This is the weirdest one I’ve seen:

A pair of Joe's sideburns. pic.twitter.com/nYKX1SV9za

You can click through on any of those tweets above to get to the original Twitter thread if you want to add any random memorabilia of your own.