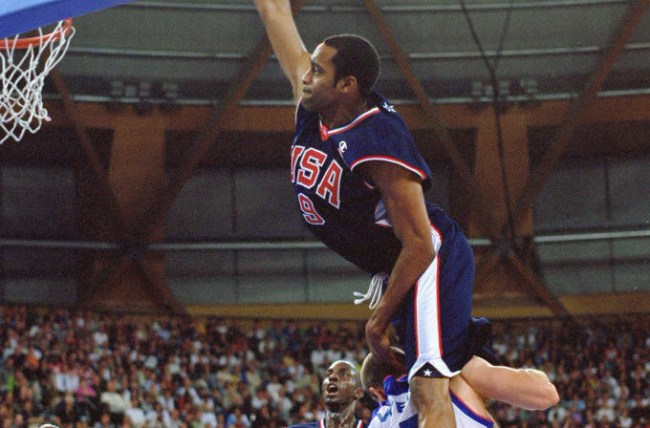 The 1992 United States men’s Olympic basketball team is widely considered the most formidable squad of players ever assembled, as the Dream Team possessed a level of talent that made everyone who faced off against them in Barcelona question why they even bothered to start playing basketball in the first place and every single guy on the roster not named “Christian Laettner” eventually found their way into the Hall of Fame.

When you consider they won every game they played by an average margin of almost 44 points, it’s doubtful we’ll ever see another group of guys that will ever toy with their opponents on an international stage quite like MJ, Magic, and the rest of the boys did. However, *extremely 30 for 30 commercial narrator voice* what if I told you the Dream Team isn’t actually the most demoralizing force to ever represent America at the Olympics?

Before I deliver the slightly spicy take I’m about to serve up, I should acknowledge that I don’t remember watching the Dream Team play because I was at a point in my life where “truck” was my favorite of the four words I knew how to say at the time. I should also stress that I’m not trying to take away from what those guys managed to achieve almost three decades ago, but if we were going to hand out an award for the greatest individual accomplishment in the history of Team U.S.A., I don’t see how you could give it to anyone other than Vince Carter.

The NBA is planning on resuming its season by having 22 of its 30 teams to play eight more games to firm up the playoff picture. The Atlanta Hawks—who Carter played for in his record-breaking 22nd season in the league this year—are not good at basketball and will subsequently not be receiving an invitation to Disney World.

While Carter hasn’t officially announced his retirement, he spent the most recent season riding the bench, and based on what Trae Young posted on Twitter on Wednesday, it’s hard to imagine the 43-year-old won’t be stepping away from the game.

Never wanted this day to come OG… 22 years playing at high level at the highest level is mind blowing… but you did it fam , All the Memories & Locker room talks will be with me forever !! THANK YOU @mrvincecarter15 🤝 #Vinsanity 🗣💯 pic.twitter.com/CzCpZoa227

Carter did get to go out on a high note, as Lloyd Pierce granted the wishes of fans who chanted the name of the eight-time All Star in the closing seconds of the last game before the NBA hit the pause button and the Knicks were nice enough to give him a look from deep that he absolutely nailed.

Vinsanity was a pretty solid three-point shooter over the course of his career but he didn’t earn that nickname because of his prowess behind the arc. No, he did it by dunking with no regard for human life.

Much like no one will ever top the Dream Team’s collective performance at the Olympics, I highly doubt we’ll see anyone who’s able to put on a show that’s more entertaining than the one Carter treated us to at the Dunk Contest in 2000.

It appeared he pulled everything out of his bag of tricks on his way to securing the trophy that night, but later that year, we learned he had one more trick up his sleeve at the Summer Olympics in Sydney.

The American team that traveled to Australia that year was an interesting mix of NBA legends like Ray Allen, Jason Kidd, and Kevin Garnett and guys like Vin Baker and Antonio McDyess you probably forgot existed until you just read those names.

Like their 1992 counterparts, the 2000 squad also went undefeated on their way to securing the gold but did so in a less decisive manner, as they only beat Lithuania by two points in order to advance to the championship game. However, even if they had lost that contest, the team would have still been remembered for eternity thanks to what transpired a couple of games prior.

The phrase “put on a poster” is commonly used to describe defenders who failed to live up to that label while finding themselves on the wrong end of a vicious jam but it doesn’t come close to doing justice to what Carter did to the 7’2″ Frédéric Weis, who got put on a billboard when Team U.S.A. faced off against France in a preliminary round game.

With his team up 15 a few minutes into the second half, Carter grabbed an errant pass and drove toward the lane where Weis was waiting for him. Faced with a few options, he decided none of them were better than jumping straight over him and slamming it home.

I could watch that replay one million times in a row and not get bored but the dunk also resulted in one of my favorite sports pictures ever thanks largely to the “Did dis dude just did dis?” expression on KG’s face. 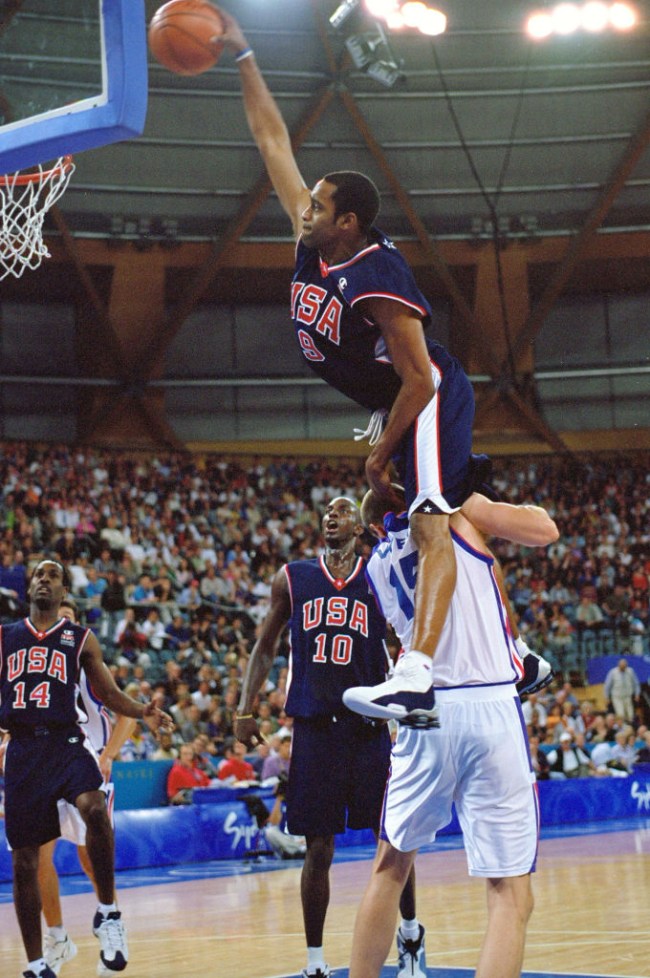 ESPN published a fantastic story about what the French media dubbed “The Dunk of Death” on its 15th anniversary, where Weis recalled not knowing exactly what happened because he had his eyes closed only to see one of his own teammates going crazy on the bench when he opened them.

The Frenchman—who was drafted by the Knicks but never played a game in the NBA—admitted he avoided watching replays of the dunk for a decade but says Carter deserves all of the praise he gets for what he managed to pull off that day and even tried to get the NBA to let him participate in the dunk contest one last time earlier this year.

Thanks for all of the memories, Vince—but especially for this one.