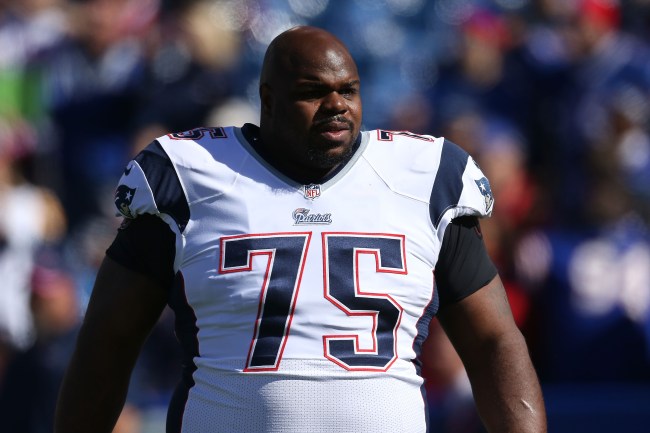 The son of former Patriots star Vince Wilfork has been arrested and charged after he allegedly stole hundreds of thousands of dollars worth of jewelry from his father, including two Super Bowl rings, and tried to sell them online.

On May 22nd, 23-year-old D’Aundre Holmes-Wilfork was charged with theft of property greater than $300,000. according to a police report obtained by the Galveston County Daily News.

D’Aundre Holmes-Wilfork, 23, of Friendswood, was arrested May 22 and charged with theft of property greater than $300,000. The Galveston County District Attorney’s Office released a police complaint about the charges against Holmes-Wilfork on Monday.

According to the report Wilfork noticed on May 10 that he was missing two Super Bowl rings, two AFC championship rings, a college football national championship ring, necklaces, bracelets and earrings but initially thought he had misplaced them in storage.

A Patriots fan alerted Wilfork that someone had been trying to sell his Super Bowl rings online.

The person who was selling the rings revealed that he had paid $62,000 to Wilfork’s son for the rings. The seller returned the rings to Wilfork who then reported his property stolen to the police.

Earlier this year, however, Wilfork received a message from a Patriots fan, who alerted him that a person was claiming to have acquired Wilfork’s championship rings and had posted information about them in a memorabilia group online.

Wilfork was able to reach the person who claimed to own the rings. That person said he had bought the jewelry from Holmes-Wilfork in May 2020, paying $62,000 for them.

The rings were turned in to the Friendswood Police Department after they were reported stolen, according to the complaint.

Holmes-Wilfork is currently out of jail after posting $300k bond.