Vince Young Trashes His Former Coach Jeff Fisher, Says He Is ‘Going To Expose His Ass’ 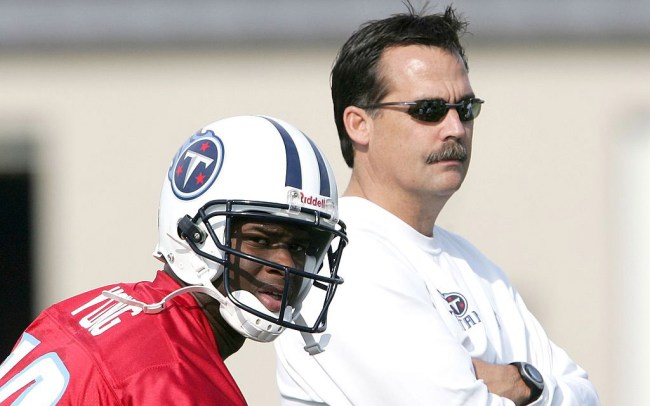 Now some might say that NFL coach Jeff Fisher got “exposed” the past couple of years with the job he did coaching the Rams. The fact that he was fired a week after getting a contract extension was pretty much the height of comedy for the Rams in their first year back in Los Angeles.

That being said, one of Fisher’s former players, Vince Young, who worked under Fisher for several years in Tennessee until he was released in 2010, says he is going to expose Fisher. Or more specifically, “expose his ass.”

In a new interview with Sports Illustrated, Young delved into the relationship he had with his former coach despite saying that he was saving the best stuff for his book…

Young went 8–5 as a rookie starter and galloped 39 yards into the end zone in Houston, sticking it to the Texans in overtime that December. But his relationship with Fisher began to deteriorate during the following off-season, when Chow was fired. A decade later the quarterback tries to sidestep questions about his old coach, saying, “I don’t want to get into it” and “I’m saving that for my book.”

But Young can’t help himself. He may believe he’s moved on from what transpired in Tennessee, but broach the subject, and he appears angry, conflicted. “I’m going to expose his ass,” he says of Fisher, who he claims stripped all the fun from football, pushing Young until he broke. Whereas Brown had been the father figure Young always wanted, Fisher, he says, acted like someone saddled with an unwanted stepson. Family members, close friends, even Young’s pastor describe Fisher as “jealous” and “envious” of the QB.

Then Young goes on to describe a time when he was two minutes late for the team plane only for Fisher to take off without him.

Young describes an incident from November of his rookie season when he left his ID at home before a road game against the Eagles. As he tells it, he went to retrieve it and was then held up by a funeral procession en route to the team plane, so he called Fisher to say he would be two minutes late. Young had seen Fisher hold the plane for other players, but this time he did not. “I feel like Fisher did that s— on purpose,” he says. “I’m pulling in, seeing them pull the door down. I can hear the team yelling.” As Young stood on the tarmac, grounded, he could only watch as the team he was supposed to lift into the playoffs soared into the sky without him.

At McNair’s urging, Young chartered a private jet to Philly instead. In his defense Fisher cited team policy for not waiting. Young wasn’t having it. “Where I’m from,” he told the coach, “that’s like saying F you.”

Well, this is the same coach who cut a guy for bringing a girl into his training camp dorm room, so color me not surprised.

What does surprise me is that Fisher lasted as long as he did. You know, since he is currently tied for the most losses ever by an NFL head coach thanks to six straight losing seasons before finally getting the axe.

Can’t wait for that book.