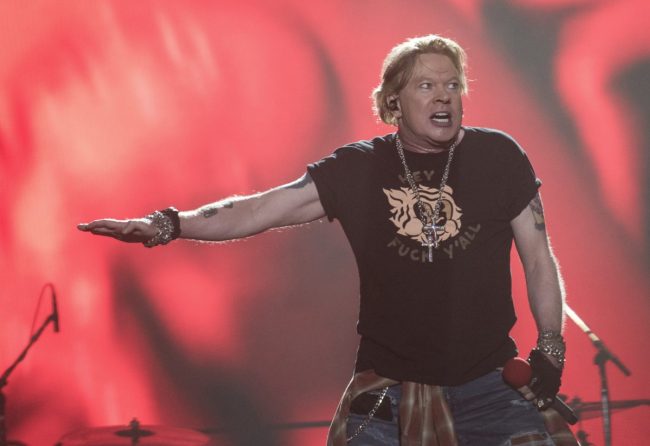 Honestly, it’s difficult to tell the two apart. Rose looks like Stoops with a head of hair leading many to question if the Wildcat leader has been doubling as a rock star during the offseasons.

Shannon The Dude, a Kentucky sports radio personality, shared the picture on Twitter. We’ll let you be the judge.

I know this is Axl Rose but all I see is Mark Stoops with hair. pic.twitter.com/5i49xosvzg

Stoops apparently got wind of the comparison, and he doesn’t deny the similarity. He also says he, too, “can jam out a little bit.”

Rose, meanwhile, is a member of the Rock and Roll Hall of Fame. The lead singer was one of the biggest music personalities of the 80s and 90s, and he’s still touring around the globe with Guns ‘N Roses.

Fans of both college football and rock and roll have been quick to comment on the hilarious viral photo.

Upon seeing the mirror images of Mark Stoops and Axl Rose many have been responding on social media. Take a look at the immediate reaction.

find me a picture with them both in the same room. i'll wait. pic.twitter.com/d7U99fe3Wu

Some fans picked up on the similarity before this viral post.

I’ve been saying this forever! pic.twitter.com/mRANa4VJkZ

One fan even photoshopped Stoops’ face onto Rose’s, and it looks like the same picture.

Welcome to the Jungle! pic.twitter.com/UKyzVmjHPL

This picture won the internet today.