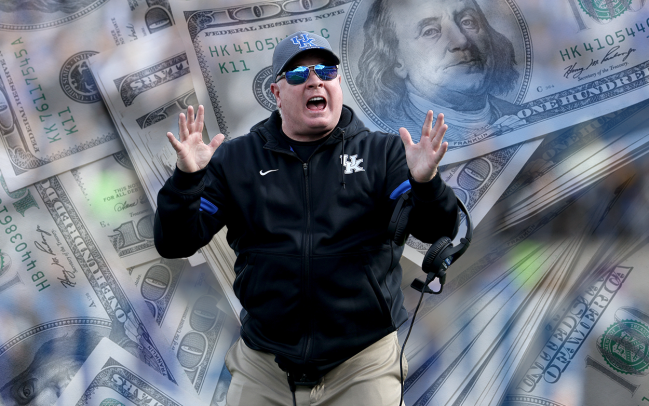 Kentucky head football coach Mark Stoops has an issue with the current state of Name, Image and Likeness within college football. Specifically, he does not believe in the word “collective.”

An NIL collective, in long form, is a business entity that is formed by supporters of a school’s athletic teams under state laws. The purpose is to generate revenue, which is then used to fund NIL opportunities for college athletes at particular schools.

In short, an NIL collective is a big pool of money that is used to pay college athletes in exchange for their Name, Image and Likeness. It’s almost like crowdfunding, but for athletes.

During an appearance on KSR Radio this week, Stoops went so far as to call collectives illegal. He believes that programs that are operating through those avenues are breaking NIL laws and Kentucky will not do it that way.

“We don’t call it a collective, because the University of Kentucky, we believe that word is illegal, to pay players to come there right out of high school. I’ve always had a belief that players are going to earn it here. I’ve said that from the beginning. We’re going to earn it, we’re not going to give it away.”

Putting the semantics on what to call the NIL fundraising efforts aside, Stoops admitted that the Wildcats are behind in the space.

“Blaming nobody, are we where we need to be? No. Simple answer: No.”

Mark Stoops ealso ncouraged boosters to contribute to a pool that is being marketed as “pre-funded endorsement marketing dollars.”

During his redio appearance, Stoops put out a quasi-call to action to his boosters in Lexington and around the program. It sounds a lot like what a collective does, but that is neither here nor there.

“I’ve kind of poked around it and different media sessions and things of that nature, but we need people to step up. They need to understand — this is the second time I’ve gone on record saying this — it is legal for them to step up and pay some of the people in town here. Or I should say, pay out an expense from their business.

“You can set aside future marketing deals to a fund, to a ledger to people to put that aside and use that in the future for marketing.”

From there, Mark Stoops went on a very confusing rant about the legality of NIL.

He is directly against collectives, but encourages his boosters to contribute “pre-funded” money, which is already semi-conflicting. Stoops also took aim at programs and players that are making financial deals under the table, even though that has been something that has always been the case.

College football programs have always paid their players under the table. Even before NIL and especially in the SEC. So what is Stoops trying to say? What is his point?

It is already abundantly clear that the current era of NIL in college football has very little policing attached. That was the case before NIL too. So then…. what?

All-in-all, Stoops’ comments on Name, Image and Likeness were very all over the place. He started by bashing collectives and then asked for more money. He pointed fingers at the current landscape of college football while admitting that his program his behind in NIL.

The biggest takeaway is that Kentucky is not the place to go if you are seeking NIL money. That only hurts the Wildcats in recruiting, so it is unclear what Stoops’ comments were intended to say.