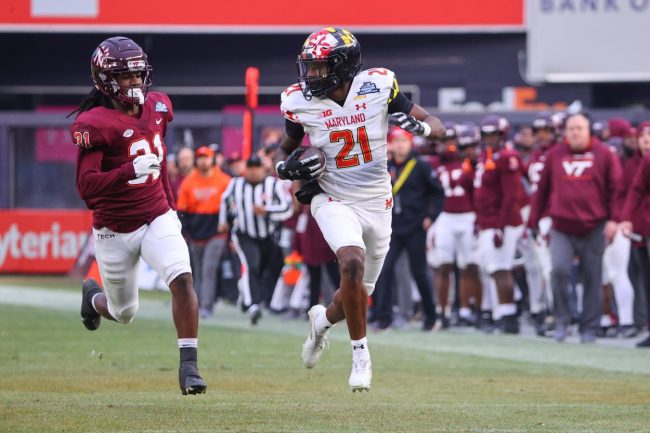 Virginia Tech football had a tough showing on Wednesday. Playing in the New Era Pinstripe Bowl, the Hokies proceeded to get mollywhopped and lost 54-10 to Maryland.

Played at Yankee Stadium, the bowl game itself was a picturesque setting. Virginia Tech’s helmets, however, were not so much.

Because of the game’s location, the Hokies took the field wearing the Yankees’ interlocking logo on its helmets.

Virginia Tech is wearing the #Yankees’ interlocking “NY” on their helmets for this afternoon’s @pinstripebowl.

Asked about the tribute, Yanks president Randy Levine said: “I thought of The Boss.” pic.twitter.com/rK3Srznd2g

It did not work out well for them. The game was ugly from the jump.

One moment in particular was extremely comical.

Virginia Tech is in a time of transition. Midway through November, the school fired its head coach Justin Fuente.

As a result, interim head coach J.C. Price led his team out onto the field in New York On Wednesday. About three quarters of the way through the first half, already facing a 3-7 deficit, Price’s defense gave up a lengthy touchdown, which is not funny by itself.

But the timing made it absolutely hilarious.

At the end of November, the Hokies announced former Penn State defensive coordinator Brent Pry as its next head coach. ESPN invited him to the booth on Wednesday and he spoke about the future of his team.

“We’re going to play a great brand of defense,” he said.

Literally seven seconds later, Maryland quarterback Taulia Tagovailoa (brother of Tua) took the snap and unloaded over the middle for a completion. Exactly 15 seconds after Pry’s comments about his defense, the Terrapins wide receiver crossed the goal line on the end of a 70-yard touchdown.

The timing could not have been funnier, take a look:

Virginia Tech’s “great brand of defense” then proceeded to give up 40 more points on the day. Pry has a lot of work to do.