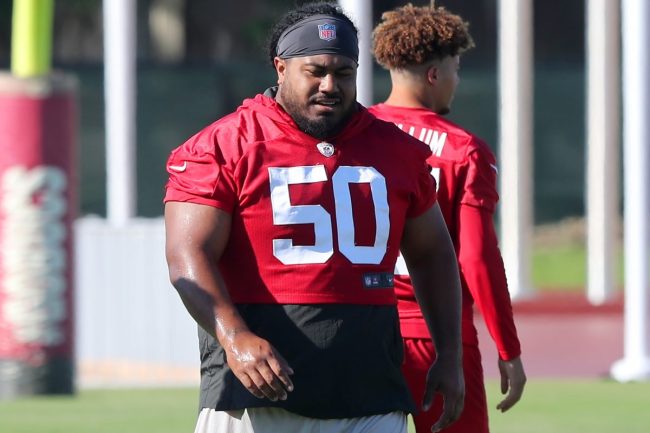 Bucs’ lineman Vita Vea is going viral on social media after being seen shotgunning a can of Gatorade at the team’s most recent training camp.

Vea is looking to improve upon a 2021 season where he racked up 33 tackles from his defensive tackle position. The big man recorded a career high four sacks while anchoring the front line of a defense that ranked fifth in the league in points allowed.

That performance landed Vea his first Pro Bowl invite, something he’s hoping to repeat in the upcoming season.

The journey to that goal starts now, with NFL teams in the midst of training camp.

The defender was mic’d up by the Bucs on Thursday, which led to this hilarious clip that’s now making its way around Twitter.

Vita Vea was spotted absolutely annihilating a can of Gatorade during a team break. The commentary on the clip is fantastic.

“Bobby, let me shotgun one. You got a key on you?”

After downing the beverage in blistering fashion, a teammate says to Vea, “You could kill a beer.”

The defensive lineman apparently doesn’t drink beer, but instead takes a classier route.

Could’ve fooled me with the way he slammed that shotgun.

Fans on social media were quick to react to the hilarious video.

Vita Vea shotgunning a Gatorade is the official sign that football is back pic.twitter.com/adBhuYl4Fs

Vita Vea shotgunning a Gatorade in .5 seconds is the most impressive thing I’ve ever seen pic.twitter.com/9Mfew4RKyb

How Tom Brady is looking at Vita Vea after crushing Gatorade in practice. pic.twitter.com/17CA8lRXpM

Vita Vea shotgunning Gatorade is the football everyone needs.