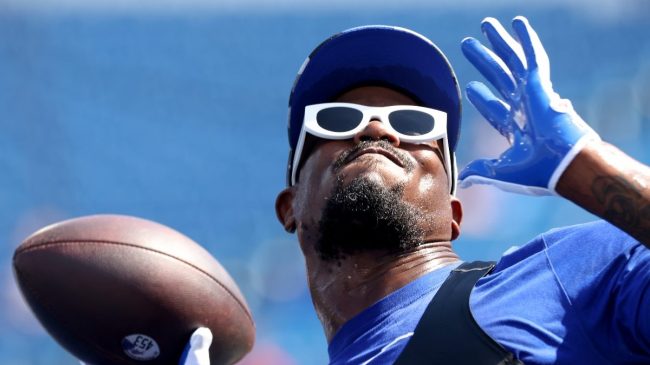 Von Miller is one of the best defensive players in the NFL, there is no question about that. However, during a promo for his new show, the Buffalo Bills star made some bizarre player comparisons with NBA stars, including Kevin Durant. For that reason, sports fans decided to absolutely roast Miller.

Bleacher Report shared a clip of Von Miller’s new show where he compares some of the NFL’s biggest stars with NBA players. This is an exercise many have done before. Regardless, we’re not so sure the Bills’ edge rusher is accurate with his comparisons and the fans seem to agree.

.@VonMiller says he’s the KD of the NFL 👀

Okay, so first off, we’re going to give Miller his Aaron Rodgers-LeBron James comparison. Only because Tom Brady is closer to Michael Jordan than anyone else in the league. It’s still a bit questionable though, as the fans point out the lack of championships under Rodgers’ belt. From there, things get a bit out of hand for Von Miller though.

Horrible comparisons lol Rodgers is Lebron? Bron got 4 chips cut it out Rodgers ain’t won shit since Obama was in office.. his first term 😂😂😂 https://t.co/N73WhDfGQG

The Cooper Kupp-Stephen Curry comparison was confusing to us as well.

Doesn’t have a super flashy game….He talking about the same Steph? pic.twitter.com/dYfDbn0jv4

We’re going to have to agree with Garrett on this one.

Von does not know ball

It feels like this is the only thing that makes Von Miller and Kevin Durant similar.

Bro admitted that he only goes to superteams😹

Maybe Miller watches basketball or maybe he doesn’t. Regardless, these comparisons are not that accurate by any means. Perhaps Von Miller will watch more NBA games in his off-time moving forward. But for now, he’s busy helping the Bills chase their first-ever Super Bowl win.