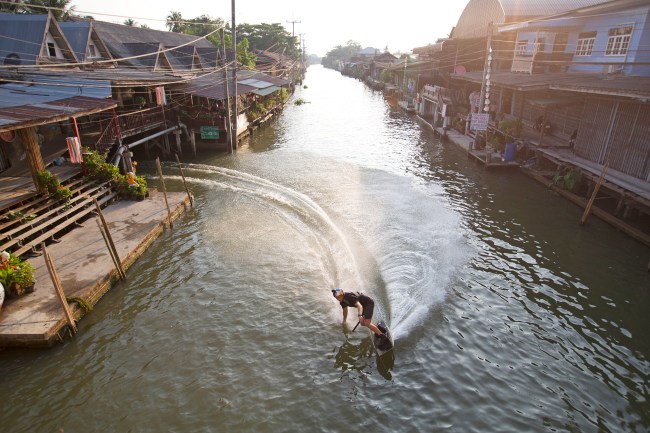 Dominik Guhrs and Red Bull just teamed up to release some of the coolest wakeboarding footage I’ve seen in years. Long gone are the days when surfing, skating, and wakeboarding movies were released on the regular back when bands would use those as a way to release new music alongside footage of extreme sports athletes shredding, but Red Bull’s keeping the tradition alive with clips like this.

At 13-years-old, Dominik’s career as a pro wakeboarder was almost over before it ever even had a chance to really take off.

He suffered a basal skull fracture that almost sidelined him for life but he rebounded from that and went on to win the German Wakeboarding Championship three times in 2004, 2005, and 2007. He won the World Championships in 2011 and the WWA World Tour title in 2012. 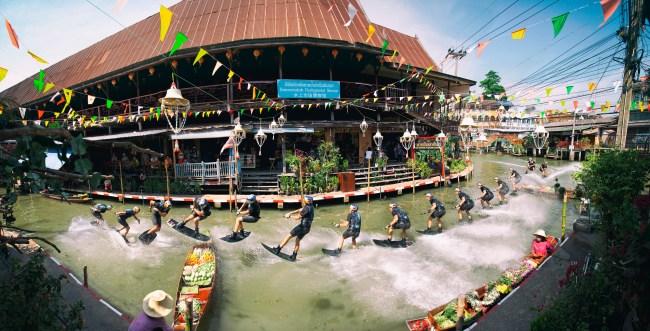 He might be the best extreme sport/boardsport athlete to ever come out of Germany and for his latest adventure he teamed up with Red Bull to shred the waterways and floating markets of Bangkok, Thailand. This is some of the chillest wakeboarding footage I’ve seen in years.

I’ll admit that I’m not as tapped into the sport of wakeboarding as I was back in the day when I won a local Hyperlite Grassroots competition and took home the Gold medal for my division but I still pay attention to videos like this when they’re so captivating:

Filming this must’ve been a crazy logistical feat. You can tell that there aren’t any waves on the waterways so he’s obviously not being pulled by a boat.

My first thought was that he was being dragged along by a powerful drone which is pretty possible but every time they show him holding the handle the towrope is flat, so something is pulling him from out front.

He also shreds his way under several low-hanging bridges so it can’t be something high up in the air that’s pulling him along. I don’t even need to bother Googling to know that this is 100% the first time any pro wakeboarder has been able to shred the waterways of Thailand which means this is the first and only time all of those locals have seen anything like this happen and that must’ve been such a trippy experience for them.

In the outtakes, you can see that they were filming with a drone because one flew into a powerline and got demolished but I missed any sign of what was pulling him along in the waterways.

In the credits, they have someone listed as ‘skateway winch operator’ which leads me to believe at least some of the portions were filmed using a winch pulling him in at a high speed but how does that account for all of the twists and turns? There’s no way they could’ve used that for every shot.

I can’t even begin to imagine how many takes it must’ve taken to film this video. Just a massive logistical project that paid off with some of the coolest wakeboarding footage ever captured. Well done, Red Bull.