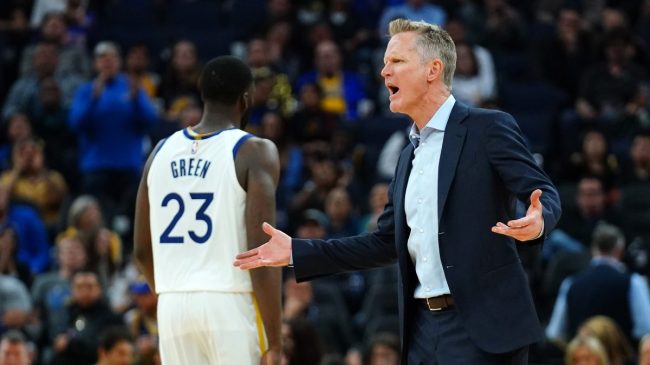 The Golden State Warriors found themselves in a sticky situation after a video surfaced of Draymond Green punching Jordan Poole in practice. Since then, the future of both Green and Poole became unclear. However, Steve Kerr has announced the club’s final decision.

Draymond Green To Return To Warriors And Face No Suspension

According to Kendra Andrews, the Warriors head coach has announced that Green “will be back with the team Thursday and will be available to play on opening night.” So with that, it appears as though the organization is putting the incident in the past. Additionally, Draymond Green avoids any suspension for his actions but is going to pay a fine.

Steve Kerr says that Draymond will be back with the team Thursday and will be available to play on opening night.

Everyone deserves a second chance and that’s the exact approach Steve Kerr is taking with Green, per Kendra Andrews.

Kerr on Green: "He broke our trust, but I am giving him the benefit of the doubt because I think he's earned that. And I think our team feels the same way."

It’s important to note that Jordan Poole is aware of how it is all playing out. Based on what Kendra Andrews is reporting, it sounds like he and Draymond Green are settling their differences for now. This is the best possible solution for the Warriors, as they are able to maintain their championship roster.

Kerr says that Jordan Poole was involved in the conversations with both Kerr and the front office about Green's return.

Poole and Green also met with each other.

And with that, Golden State is shifting its attention to the regular season. After winning the title last year, this team has high hopes to repeat. Draymond Green and Jordan Poole play vital roles in the team’s success. So it makes sense why Steve Kerr and the Warriors took the approach they did.

Make sure to tune into the Warriors’ first game of the regular season on Tuesday, October 18, as they take on the Los Angeles Lakers.