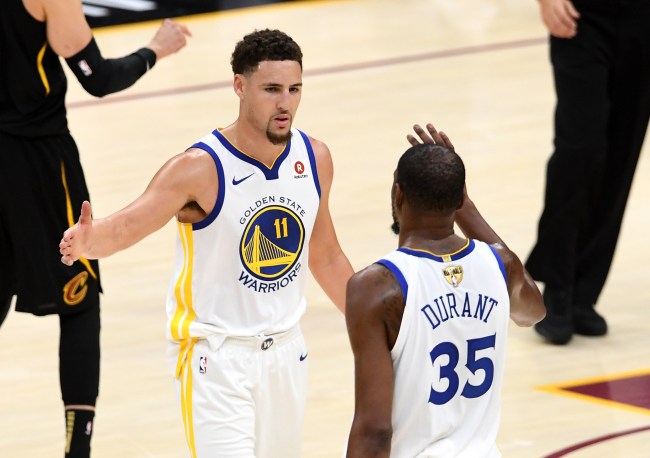 The Golden State Warriors had a disastrous NBA finals. Not only did they lose Kevin Durant to an Achilles injury in game 5 but Klay Thompson also suffered a devastating ACL tear during last night’s game 6.

KD and Klay are going to be free agents and were expected to receive max contract but considering both players will miss most of if not all of next season it seems like it may be tough to find suitors who are willing to take a risk on them.

Steve Kerr just said that Kevin Durant is going to miss next season with his Achilles injury.

Eight-ish months for an ACL tear, on the very low end recovery wise, is mid-February. Gotta figure Klay Thompson is out until at least the All-Star break, if not all next season.

I see all the optimism for a late season return for Klay but he will not be close to 100%. Harder to come back from ACL in basketball than football. Unlikely to see an "Adrian Peterson" type return. Still worth a max deal but payoff wont cime until fillowing season. https://t.co/dOGSUTQ6vu

According to ESPN’s Brian Windhorst, the Warriors still intend to offer KD and Klay max contracts despite their injuries.

Windhorst's 'understanding' is that the Warriors still 'intend' to offer Klay Thompson and Kevin Durant five-year max deals, which would push payroll with luxury tax to about $350 million pic.twitter.com/JLmCqp5OTx

The Warriors can afford to take the risk of signing both players considering their moving into a new arena that will make them a ton of money.