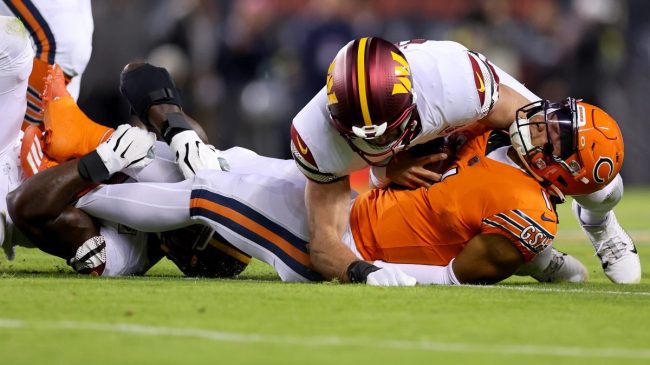 Last week’s Thursday Night Football game between the Denver Broncos and Indianapolis Colts was almost impossibly bad. So bad. even, that it left fans wondering if it was perhaps the worst NFL game ever played.

But even those fans knew that could get worse, much worse. That’s because Amazon repeatedly advertised for this week’s Thursday Night Football game. That game features two of the worst teams in the NFL, the Washington Commanders and Chicago Bears, who boast a combined 3-7 record and two of the league’s worst offenses.

Oftentimes, games between the worst teams in the league produce an entertaining product. That’s because neither team is typically able to stop the other. That was, uh, not the case on Thursday night.

Instead, the teams entered halftime with Washington ahead just 3-0 a downright hilariously inept display of offense. And, despite being prepared for a complete and utter sh*tshow, fans on Twitter were somehow shocked by just how awful the product was.

When they told you this game was at least going to be more exciting than last Thursday’s. pic.twitter.com/qnWJGxDUvQ

Us watching this game: pic.twitter.com/6DdLGVk5Y8

All I can think of watching this game. pic.twitter.com/RysscC4sYN

Some fans presented a pretty good case for promotion and relegation in the NFL.

I'm not saying English soccer has it all figured out, but imagine if the loser of this game had to play in the Sun Belt next year?

This game like watching West Brom play Stoke. Sadness is the only winner

The good news is that it can’t possibly get any worse, right? At least next week features a potential quarterback matchup between Andy Dalton and Kyler Murray. Oh, wait…