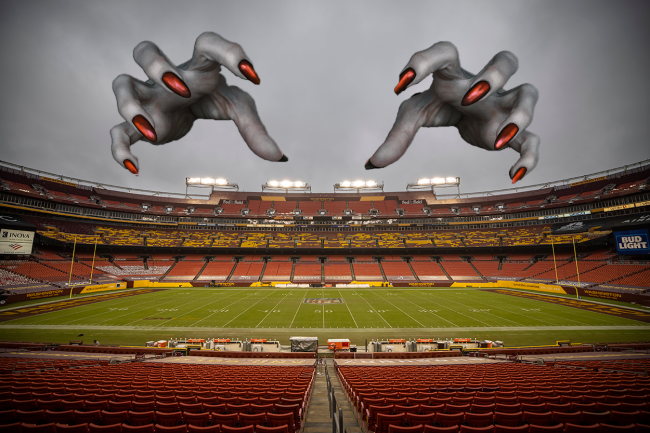 FedEx Field is notorious for being one of the worst stadiums and playing surfaces in football, if not all of sports. Thus, when the Washington Football Team announced a new field-inspired promotion earlier this week, it was open season for football fans.

On Tuesday, the WFT shared that it partnered with Lay’s Chips to grow potatoes in fields mixed with the grounds from FedEx Field. The potatoes, obviously, were later turned into chips.

Lay’s grew potatoes in fields mixed with the grounds from @FedExField!

Visit @LAYS to find out how you can win this limited edition bag‼️ pic.twitter.com/G0oUPSaslX

Although it is unclear how exactly FedEx Field’s grounds were used to grow the potatoes, the chips are now cursed.

A graphic has recently gone viral that shows the horrible things that have happened at FedEx field over the course of the last decade.

This piece of real estate gotta be the most cursed place in the entire NFL pic.twitter.com/IKxGvAdrA4

The series of unfortunate events and serious injuries at FedEx Field began just over 10 years ago. Here is a timeline:

In addition to the injuries and near-injuries, a pipe burst earlier this year and caused sewage to spill on fans. And, to top things off, scissors were found on the field during the game in December.

Thus, when the team posted its partnership with Lay’s, football fans reacted accordingly.

Trust me you don’t want an acl/mcl tear

When somebody bites into that pair of scissors….. oooweee

And this is how the potatoes were watered… pic.twitter.com/Dz7fDmmaBU

If you want chips that will devour your ACL, eat these!

Will I tear my acl if I eat them?

Nah if you eat that you’re tearing your ACL

LOL! “Grown in Glory,” lol. At least they had easy to access to fertilization with the bursting sewage pipes. “Grown in futility. The taste of failure!”

Perhaps these chips don’t need to make it to market. We don’t need anymore torn ACLs.