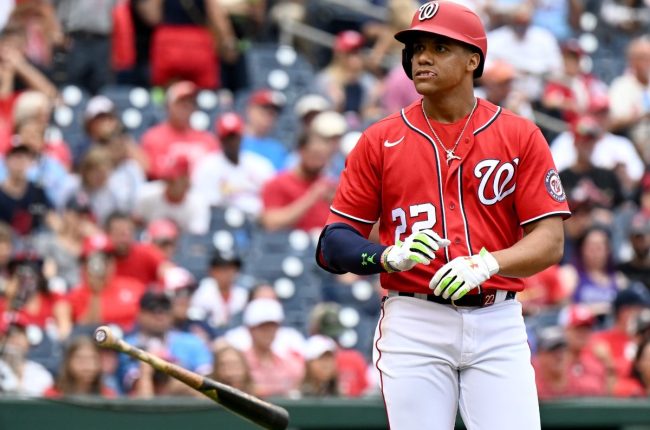 Juan Soto and Josh Bell are the latest star players to be traded from the Washington Nationals. The club dealt the pair of sluggers to San Diego where they’ll now move from cellar dweller to playoff contender.

The Padres are obviously excited about the deal, as they’ll now have one of the best lineups in baseball. The additions of Bell and Soto, along with the returns of Wil Myers and Fernando Tatis will make them a dangerous team come postseason.

They’ll stock up on minor league talent in hopes of returning to the World Series when those youngsters make their ways to the bigs.

Remember, the Nats aren’t far removed from their last title. The club won it all back in 2019 on the backs of players like Max Scherzer and Anthony Rendon.

But rather than build around that core, the team gave its talent away after reaching the sport’s pinnacle.

It’s a trend that’s been seen in Washington over the last handful of years.

CBS Sports listed out the number of star players that the Nationals have let walk over the last four seasons. They consist of an MVP, Cy Young winner, and a pair of All-Stars.

Names include Bryce Harper, Max Scherzer, Anthony Rendon, and Trea Turner, most of whom had made major impacts in new locations. You can throw current National League home run leader Kyle Schwarber on that list, too.

Fans have been quick to react.

This is an insane amount of talent to lose in just 5 years. https://t.co/ezyRUMSaTX

Heart broken. Soto, Harper, Rendon, and Turner all home grown. All gone. Not a single one extended.

I understand why being a Yankee or Dodger fan is cool 🤬 https://t.co/K6IXtnaNuP

It's not about the size of the market, it's about the willingness of ownership to try to field a winning team.

Hey, at least they got one ring out of the group while they had them.