UFC 240 Stream: How To Watch UFC 240 On ESPN+ Featuring Holloway vs. Edgar And Cris Cyborg vs Felicia Spencer 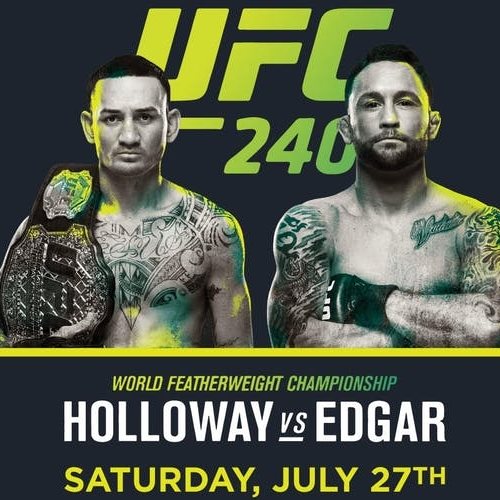 It’s hard to believe that all the excitement from UFC 239 was just a few weeks ago. Jorge Masvidal with the fastest KO in UFC history against Ben Askren, with a flying knee that shocked the world. Amanda Nunes with a DOMINATE performance against Holly Holm. Jon Jones taking Thiago Santos long.

UFC is back in Canada tonight for UFC 240 from Rogers Arena in Edmonton, Alberta, Canada. The UFC 240 PPV features an exhilarating main card with co-main events: Max Holloway vs. Frankie Edgar and Cris Cyborg vs Felicia Spencer. The only place to stream UFC 240 pay-per-view is ESPN+, where the main card can be bought with a year-long ESPN+ subscription for $79.99. The UFC 240 PPV itself is $59.99 on ESPN+, with the prelims available to watch on ESPN at 8PM ET and the main card starting at 10PM ET.

If you’re looking to watch UFC 240, a few things to keep in mind: This is the first time Cris Cyborg has stepped in the octagon since taking out Amanda Nunes, the defending women’s bantamweight champion, with a first-round knockout this past December. Two of the great lightweight UFC fighters of the era, UFC featherweight champion Max Holloway is defending his title tonight against UFC lightweight champion Frankie Edgar.

The UFC 240 stream is going to bring some serious fireworks tonight and the only place to watch UFC 240 is ESPN+:

The only place to watch UFC 240 pay-per-view is ESPN+, so grab your buddies for a fight night and settle in for an epic main event. ESPN+ makes watching a UFC 240 stream easy no matter what device you’re on – After buying the UFC 240 pay-per-view, all you have to do is log into your ESPN app on your phone, smart TV, or any other streaming device. Boom – It’s right there for your Saturday night UFC 240 watch party. 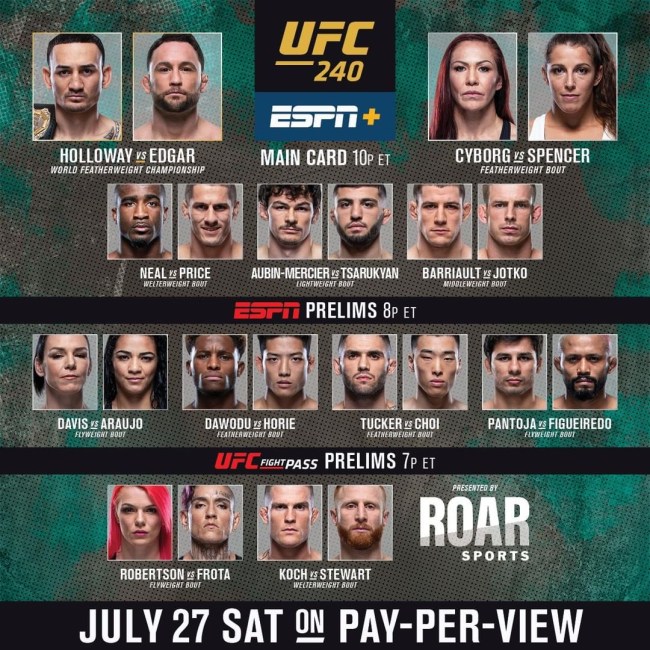