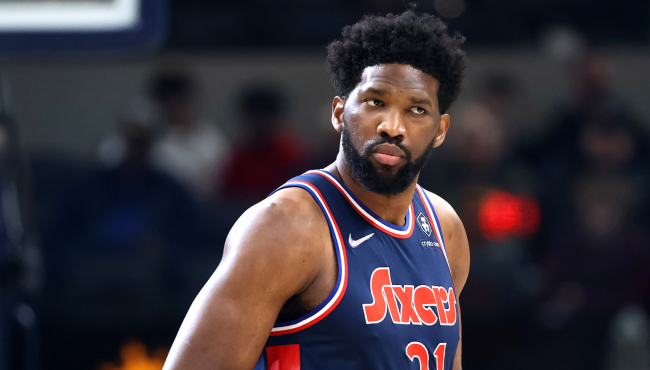 If you thought Patrick Mahomes’ odd habit of putting ketchup on everything, including steak, was troubling, just wait until you hear how Joel Embiid likes his steak to be prepared.

The popular and very likable Philadelphia 76ers star big man was recently profiled by The Athletic and it was actually his Sixers teammate Tobias Harris who spilled the tea about Embiid’s blasphemous steak preference.

“We had a lady who would greet us by the bus every time we went on a road trip, and she’d always give brownies to the seniors or whoever played best,” Niko Roberts, a college teammate of Embiid added. “And then the seniors would distribute if they felt like sharing. And JoJo was known for stealing brownies. He’d just be in the back of the bus, stuffing his face, trying to hide as much as he can.”

“Earlier in the year, my chef made some chicken wings for me to get on the plane with,” said Maxey. “I sit right in front of him and Jo’s like, ‘Tyrese, you selfish.” And I’m like, ‘How am I selfish?’ He’s like, ‘You didn’t bring no wings for me.’ So now every time I get on the plane, I always give him extra wings, something like, I don’t know, 25 or 30. And he always asks for them to be burnt.”

Joel Embiid prefers his steak to be extra, extra crispy

As if that isn’t bad enough (and it is), another 76ers teammate of Embiid, Tobias Harris, made it even worse.

“He likes his steak burnt, which is like super disrespectful,” said Harris. “We were at a very well-known steakhouse. He asks for the steak to be burnt, burnt. And the chef came out and was like he’s not burning the steak, that’s like against his chef code … (Joel) was disappointed and he was like, ‘I don’t want to eat here anymore.'”

Related: This Man Brought His Own Scale To Texas Roadhouse To Make Sure His Steak Was Truly 6 Ounces

Fans, upon hearing this troubling news about how Joel Embiid likes his steak to be prepared, were left aghast.

This has to take him out of consideration for MVP

Embiid asked for his steak to be cooked HOW!!!???

That’s it, Jokic for MVP

No one is perfect. https://t.co/0zLSwyVl2v

The piece also covers how Embiid shows no mercy – even to children – when playing Madden of NBA 2K, how much he loves to troll people – especially when playing cards, and other hilarious stories from his friends and teammates. Check it out here.