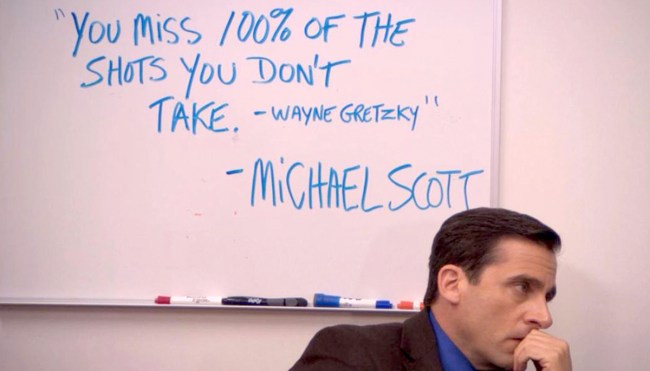 It’s hard to imagine there are many people out there who aren’t familiar with Wayne Gretzky’s legendary hockey career. However, it’s safe to assume that someone who isn’t even aware of the existence of the NHL has been exposed to the icon courtesy of a motivational quote that’s been plastered on the walls of middle school classrooms for decades.

In 1983, Gretzky sat down with Hockey News editor Bob MacKenzie for an interview where he uttered the now-famous phrase, “You miss one hundred percent of the shots you don’t take.” While the Hall of Famer was specifically referring to the tried and true “pucks on net” strategy, that musing also served as a pretty solid piece of life advice that plenty of people have drawn inspiration from over the years.

That includes the one and only Michael Scott, who quoted himself quoting Gretzky when he wrote the message on a whiteboard hanging in the tiny headquarters of The Michael Scott Paper Company on an episode of The Office that aired in 2009.

It took more than 13 years, but on Thursday night, Gretzky treated viewers to an amazing quoteception when he quoted the quote of his quote on a sign he held up while posing next to the Stanley Cup on the set of NHL on TNT.

While he may not have succeeded in his quest to break the internet, it went viral for obvious reasons and secured TNT plenty of the all-important engagement in the process.