A Web.com Tour Golfer Agonizingly Missed Out On Securing His PGA Tour Card By One Inch 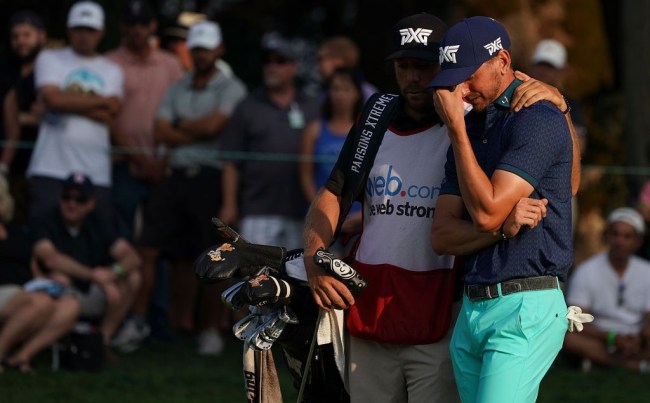 For every aspiring professional golfer getting your PGA Tour card is one of the greatest days of your life. All the hours of practice and travel have finally paid off and your lifelong dream has come true. This is especially the case for golfers who toil away on the developmental Web.com Tour.

Some of the recognizable names who have moved up to the PGA Tour from the Web.com Tour include Matt Gogel, Chesson Hadley, and this past weekend it was almost Kevin Dougherty’s turn. Almost.

Playing in the Web.com Tour’s final regular-season event, the WinCo Foods Portland Open, Dougherty started the week in 36th place on the money list. However, with rounds of 67-67-69, he found himself with a legitimate shot at making the top 25, which would earn him a much-coveted PGA Tour card.

This shot from Kevin Dougherty for a @PGATOUR card.

Kevin Dougherty will continue the quest in the #WebTour finals. pic.twitter.com/J4r0GddEGT

His dad’s reaction was pure heartbreak.

Chasing a @PGATOUR dream is as tough on the parents of the players.

Kevin Dougherty's father gets emotional rooting on his son down the stretch of the @PortlandOpen. pic.twitter.com/BcBHaUdzvj

“I mean it was pretty dead center, I thought. It had the line,” said Dougherty after the tournament. “I thought it might end up a hair short. But it just missed a hair left.”

All is not lost though as Dougherty still has a shot this year if he can do well in the Web.com Tour finals where another 25 Web.com players will earn their cards.

On the positive side, Web.com golfer John Chin moved from 41st to all the way to 10th on the money list during the tournament with this birdie on the 18th hole earning him his PGA Tour card.

He birdies the last to move from 41st on the money list at the start of the week @PortlandOpen to projected 10th, which would earn him a @PGATOUR card! pic.twitter.com/sm8iI2RwBB