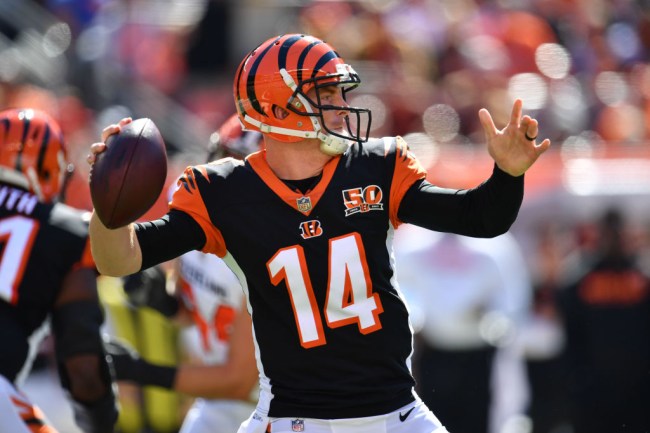 We finally hit the bye weeks and that’s always when shit hits the fan. Decent players get dropped because people are squeezed for roster spots. You’re forced to start a bunch of JAGs and I don’t mean Jaguars. (To enlighten the masses, JAG = just another guy aka someone who kinda sucks. Starting a bunch of Jaguars is probably a bad situation too.) Hopefully you’ve got a bench, but be flexible with your rosters. We obviously had a waiver wire this week that produced some players, but look at your bye weeks. If you have late bye weeks at WR and early at RB, maybe trade a WR for an RB now and then trade an RB for a WR later to help your depth.

Have you ever broken ribs before or even bruised them? I have and it fucking hurts. There’s no way Ty Montgomery is going to be able to play at full speed this weekend and there’s a good chance he might not even play at all. Aaron Jones is there and ready to go against a defense that has given up 100+ yards to teams that actually have running games. (The Giants and Arizona don’t count.)

It sure hasn’t been a good start to the year for Beast Mode, but now is the time. With David Carr out, Oakland will have to rely more on the running game. Baltimore has given up 322 rushing yards in the two games they’ve been missing defensive tackle Brandon Williams, who’s out indefinitely. That sounds like a lot of skittles to me.

Larry Fitzgerald went ham against the Cowboys. Cooper Kupp did pretty well last week in Dallas. Clearly there is a problem going on in Big D with covering slot receivers. Cobb is next up and will see plenty of balls in a high-scoring game.

Somehow it’s Jaron, not John, Brown that has taken over as the #2 wide receiver for the Cardinals. Jaron is seeing targets and should put up some #s against the Eagles, who have given up the most yards per game to receivers to start the season.

The Giants have given up a touchdown, at least 6 catches, and at least 45 yards to tight ends in each game this year. It’s been the same story for years now: start your tight ends against the N.Y. Giants. I don’t have faith in old man Gates so Henry it is.

Dalton has shown signs of improvement since Bill Lazor took over as offensive coordinator in Cincinnati, but it’s about to come crashing down. Buffalo has only allowed one passing touchdown all season long and zero 300-yard passing games. They’ve faced guys like Matt Ryan and Cam Newton, so it’s not like they’re always facing slouches either.

Usually you’d start a running back playing at home who is approximately a touchdown favorite if his backfield partner is banged up to injury. But we’re sitting Blount this week despite all that and the quality Eagles offensive line because the Cardinals are shutting down the run this year.

If you picked up Rawls because coach Pete Carroll said that Rawls will be getting the rock then you need to remember that Carroll is one of the kings of coach-speak. The reality is both Rawls and Lacy will split carries and Lacy looked pretty decent last week. You’re better off waiting a week on Rawls (or both) if you can help it.

Cooper was killing teams to start the season and not it will be even worse with E.J. Manuel. Crabtree was doing ok, but both guys face off against tough cornerbacks this weekend. Jimmy Smith and Brandon Carr have been doing a really good job against opposing wide receivers to start the year. Player Profiler has them each ranked in the top 10 for cornerback rankings. Wait for another Manuel situation where he’s a big road underdog until you play these WRs.

Patrick Peterson still seems to get things done on the outside despite any historic injuries he’s had. He’s still one of the best shut down corners in the league and he has the physical frame to limit Jeffery this weekend.

Witten has dropped back to earth after a hot start. He’ll keep two feet on the ground again this week since the Packers haven’t allowed a passing touchdown to tight ends through four weeks and have only given up 106 yards to the position in total through four games.